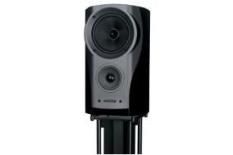 The 792s are lean and fast, but they lack overall detail and excitement and are expensive next to the best here

Not many speaker brands have had as much success in their history as Mission, but the company's output of the past couple of years has been patchy at best.

The 79 series aims to change all that, and harks back to the hugely popular and critically acclaimed 78 series.
The 792s are the first models we've tested from the range, and they're immediately identifiable as Mission speakers, particularly in the shape of the baffle and the arrangement of the tweeter under the mid/bass driver.

There's some debate among our team over their looks, so we'll leave you to decide for yourself. However, it's our job to offer opinions on sound – and, unfortunately, here it's not great news.

In the past, Mission speakers have been applauded for their speed and precision, and it's fairly clear that that's what the company has gone for here.

If you focus purely on the treble it almost seems to work – it's speedy and is pretty detailed. Unfortunately, though, this focus on treble has led to a rather lean and unsubstantial overall delivery.

Bass lacks power and depth
Try the rousing The Bridge of Khazad Dum from the Fellowship of the Ring soundtrack and you'll see what we mean.

The track relies on the pounding of very deep drums for drive, but the Missions suffer from a bass delivery that isn't powerful or deep enough to do it justice. The result is a performance that's far less epic and dramatic than it should be.

The problem is that the 792s also struggle a bit with fairly bass-light music. Adele's Daydreamer emphasises a lack of warmth and detail to the midrange. You get the leading edge of a note, and the essential core of the voice, but you seem to miss the texture and wholeness of the sound.

A little more bass would probably filter more warmth and life into the midrange, but it wouldn't fix the treble's forwardness, which can highlight the sibilance in some of the higher guitar picks.

We were hoping that the 792s would represent a return to form for Mission. Unfortunately they're more of a mediocre new entry in a hugely competitive part of the hi-fi market.