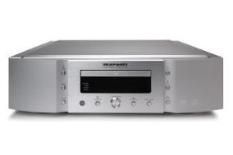 Thoroughly likeable in most ways and admirable in some, but a lack of bottom-end rigour hampers the big Marantz

There's no doubt that the Marantz SA-11S2 looks the part. It's a substantial, heftily attractive player which appears engineered to reassure those who may go a bit weak-kneed at dropping two and a half grand on a CD player. “Don't worry,” it seems to say, “I'm worth that in base metal alone.”

A scan through the spec-sheet brings more encouragement. As well as the huge toroidal power supply and expensively sourced DACs that any player at this price is expected to pack, the SA-11S2 adds a vibration-resistant drive mechanism and double-layered bottom plate.

And as well as playing CDs, the Marantz plays SACDs (they're a specialist interest less common than those of Max Mosley by now, of course, but the partial will be excited).

The provision for manually altering the digital filtering is less inspiring: just why is it that £2500 doesn't buy a player that sounds its best at all times? – but overall the Marantz looks thoroughly equipped.

And when playing CDs – we listened to everything from Prokofiev's Romeo and Juliet to Public Enemy's She Watch Channel Zero – the SA-11S2 throws
down a performance simultaneously rugged and refined.

Low frequencies, thought not the most rigorously defined, are solidly punchy while at the other end of the scale, treble reproduction is crisp and clear.

Fearless, dynamic performance
The Marantz gives voices plenty of verve and expression, and unites the frequency range cleanly. Prokofiev's vigorous dynamic shifts are handled without alarms, the orchestra occupies a large and convincing soundstage, and the overall tonality of horns, strings and crashing percussion is admirably judged.

A switch to SACD brings gains in the already-impressive levels of drive and attack, as well improved detail retrieval. The format may be moribund, but there's no doubting its audio credentials.

What problems the Marantz has lurk at the bottom end. Low frequencies lack ultimate definition, and the relatively vague entry into and exit from bass notes can cause tempos to plod a little – low-end stuff could be a little more textured, too.

But if it's a grown-up, considered and mildly tempestuous sound you're after, cock an ear this way.