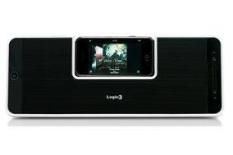 As you can probably tell from the model name, this dock has little trick up its sleeve.

If you have an iPod Touch or iPhone docked you can either have it standing upright or, you guessed it, you can rotate it through ninety degrees. The action is simple but extremely effective.

By iPod dock standards, high frequencies don't sound particularly harsh or thin although they do sound separate, sticking out from the rest of the music.

Add the fully-functional remote and you can do a lot worse for the money.