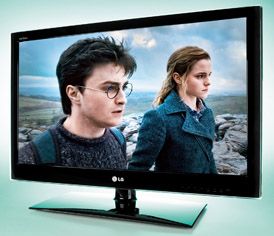 Packing plenty of features and quality in to an affordable package, this LG represents superb value for money

We were underwhelmed by the bigger brother of this set, the LG 42LV550T, when we tested it. It was left to languish mid-table when pitted against other 40-42in sets, despite an inviting price tag.

This 32in set is more affordable, but only just – and with no price advantage over its peers, it could be a tough task for this LG.

Thankfully it wouldn’t be the first time different size screens have enjoyed varying degrees of success. So, let’s keep an open mind.

Full featured, but no 3D
The 32LV550T certainly has plenty going for it on paper, boasting as full a spec, as you'll see, with the exception of 3D.

LG’s new Smart TV portal is your entry-point for most of these features.

A redesigned, bright and breezy ‘Home Dashboard’ does the job of gathering up and presenting all your content: BBC iPlayer, movies on demand from Acetrax, apps for YouTube and Facebook, a web browser – not to mention the promise of more in future via LG’s App Store.

The screen itself is slender and nicely turned out, made possible by the edge-lit LED backlight, which allows a slimmer chassis.

Not all LED-backlit screens are equal, though; LG calls this model LED Plus, which translates as edge LED with basic local dimming.

The standard-definition tuner is excellent. Colours are bold but remain realistic and there’s plenty of detail.

Blacks are solid, whites are nice and clean, and motion is handled smoothly. HD pictures provide the expected leap in quality, too, while sonically it’s clear, if a little lacking in oomph.

Upscaling DVDs doesn’t prove too much of a problem.

The disc of the latest Harry Potter outing looks reasonably sharp and noise free, and the picture is again punchy and bright. Dark scenes show black levels that are fairly solid and true, while still capable of uncovering plenty of detail.

Improved Smart Portal
You don’t need a screen the size of a garage door to appreciate the jump in picture quality brought about by superior source material, and the 32LV550 illustrates this: Blu-ray looks great.

The colour palette is perfectly weighted with lifelike skin tones, contrast levels that allow for bright days and dark nights, bags of detail and solid motion.

TruMotion does veer into unreal territory at times, but set it to a lower level and it’s acceptable.

LG’s Smart Portal looks busy – the weight of content sees to that – but it’s easy to navigate. We had slight issues with LG’s online service last time around – so-so quality and intermittent delivery – but here we enjoy what we see via iPlayer and YouTube.

Looks like this is the irritatingly successful sibling to the under-achieving 42in model, then. So long as you’re not after 3D, this is a 32in TV with which we can find few faults.