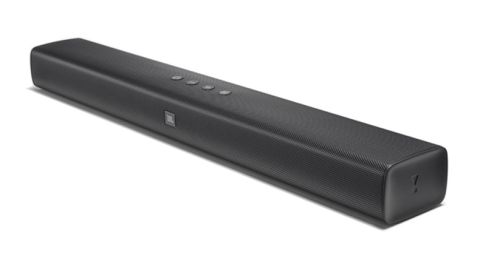 If your idea of a soundbar is simply an upgrade on your TV speakers, the JBL Bar Studio represents a fine budget option

There are times when the What Hi-Fi? rating system – reliable though it is – doesn’t quite tell the whole story.

This more often happens at the budget end of the market, where there appears to be a threshold below which it is extremely difficult to design and produce a capable all-rounder.

But while a product such as the JBL Bar Studio might not be able to compete with the very best in terms of absolute performance, on a sound-per-pound basis it certainly holds its own.

It is not a case of our compensating, or making things easier for those without the requisite talent to compete - rather this end of the market shouldn’t be neglected when it comes to digging out a worthwhile upgrade.

Four stars, of course, is still a recommendation at any price. It means the JBL Bar Studio is, effectively, among the market leaders and also a champion in more senses than it's not. For starters, there is certainly little to quibble about when it comes to its build or on-board features.

The smallest of a four-product range, the Studio is easy to accommodate.

At around 60cm in length and just under 6cm in height, it will slot under most suitably sized TVs without appearing undernourished, and has been crafted to JBL’s usual high standards of quality and aesthetic modernity.

Across the top you’ll find the basic controls for power, volume and source selection, with HDMI (ARC) and optical sockets to the rear. Bluetooth is also on board, potentially negating the need for a separate living room sound system.

The Studio’s size obviously restricts the scale of its sound, with drivers kept to two tweeters and single woofer - but two reflex ports help reinforce its low-end output.

JBL Surround Sound, an in-house technology designed to replicate the wrap-around sound of a 5.1 system, is further proof this soundbar is aiming to overcome the limitations imposed on it by its size.

To switch on that sound mode you’ll need the included credit-card remote. The Studio, as with most modern soundbars, is designed to work with your regular TV remote, but the JBL clicker is worth having around for easy source-switching and controlling bass levels.

Bass is one of the things we first notice about the Studio when we connect it to our TV. Not only that there’s quite a lot of it, but also that it’s punchy and relatively rich too.

We’re fans of a neutral balance, so wouldn’t have it all the way up - but there is undeniably greater momentum to the sound than through the speakers on our TV.

That richness is perhaps not matched entirely through the midrange, but it glides above the low-end action, showing off a more-than respectable amount of detail.

Whether it’s the sound of water in Bob Mortimer and Paul Whitehouse’s Gone Fishing or an excited dugout at the World Cup, there is more to the Studio’s presentation than simply throwing dialogue out and hoping the listener will be appreciative.

Its scale still isn’t enough to fill much more than a small to medium-sized living room, but the Studio’s performance will certainly be an upgrade on most people’s televisions.

So what’s not to like? Well, if you just want to improve your TV sound - and not at high volumes - then there’s not all that much by way of competition at this price. High volumes are one caveat of the Bar Studio, though: the treble isn’t overtly coarse, but it does harden the more we turn it up, especially when the sound becomes busy.

That might be more of a concern if you’re planning also to use your soundbar as a wireless speaker, which is where our other concerns arise. Musically, the Studio is not particularly great at timing, and lacks the dynamic expression of any of JBL’s much-loved Bluetooth speakers.

It doesn’t trouble us much for basic TV watching – there is more quality to be had further up the food chain, but dialogue is far from boring – but that is no automatically a soundbar’s sole purpose any longer.

If you want it all – infallible performance whether for TV, film or music – there seems to be a starting price. And it's more than this.

But while £150 might be too cheap for a true all-rounder, the JBL Bar Studio is proof that there are some fine performers to be had. For a confident, full-bodied upgrade to your telly’s speakers, you can’t go far wrong.