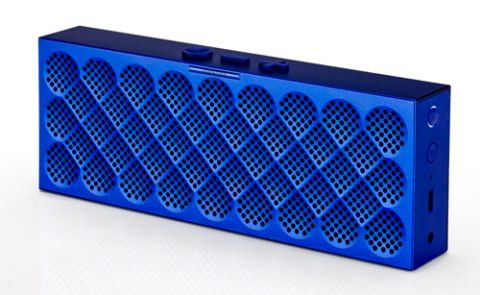 The Jawbone Mini Jambox makes quite a first impression.

Slim and light enough to slip in your pocket, its build quality is second-to-none, with a body largely made of aluminium.

It’s colourful too, available in nine finishes with several front grille patterns to choose from. It’s this grille design that takes up the entire Mini front panel, with large, stylised volume and play/pause controls along the top edge.

Smaller power and pairing buttons, plus a 3.5mm input and microUSB port, are found along the right-hand side, leaving the other edges clean.

At just 38mm thick, there are two small drivers and a passive bass radiator squeezed into its slim frame – a standard setup in portable speakers these days.

It’s good to see the most up-to-date Bluetooth version 4.0 is on board, and pairing is easy – you hold down the pairing button to make the Mini Jambox visible and then select it on your chosen device in the usual way.

There’s no near-field communication (NFC) to speed up this procedure, though.

We play Iggy Azalea’s Fancy and the synthesised bassline intro lacks depth and and impact.

There’s not a lot of bass punch here to speak of, though it stays free of obvious distortion at most volumes.

The Jambox has a mid/treble-heavy character, which is no good thing: it’s a hard, thin sound, making the speaker an uncomfortable and tiring listen for any duration.

Vocals have a harshness, sounding muffled and closed in, amid a congested presentation.

This affects the timing of tracks too, which feel dynamically flat and unexciting. There’s not much volume to play with either – fair enough, considering the Jambox’s size – and it doesn’t give any sense of oomph.

This becomes more of a problem when you take it outside (likely to be the main use) – it sounds insubstantial with no walls to reinforce its sound.

Push it to its maximum volume, and there’s enough distortion in the midrange to make you want to turn it down again.

There are a few interesting features here: the recently-added Multi Play, which lets you pair two Mini Jamboxes to play music in unison or as left and right speakers.

There’s also a free-to-download app, allowing you to turn your playlists from the likes of iTunes, Deezer, Spotify and Rdio into one mega playlist.

The Jambox’s fate is sealed by its price. At £120 you feel like you’re paying a premium for the stylish looks, rather than its sound quality.

There is better out there for similar money. A super-stylish speaker that needs to do much more in the performance department to impress.