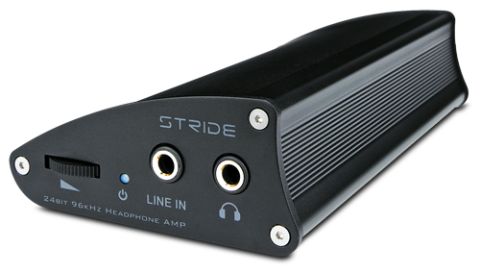 A good product, but not the most practical or talented for the money

Headphone amps and DACs tend to be relatively large boxes made to complement a hi-fi system. Traditionally they’re not the kind of item you’d pack in your bag.

But the Furutech ADL Stride isn’t your traditional device. It’s a headphone amp and USB DAC capable of accepting music files up to 24-bit/96kHz streamed from a computer’s USB socket. It also has a rechargeable battery, good for a claimed 80 hours of playback – hence the 'Stride'.

The box itself is a wedge-shaped aluminium device no longer or wider than your average smartphone. The finish is good, but not great – the unit doesn’t feel as premium as we’d expect for the money.

Furutech ADL Stride review: specs
The Stride charges via the mains or over USB, so you can top up the battery even while you’re playing music through it. Hit the power switch on the back to conserve energy when it’s not in use.

On the front there’s a thin volume dial, along with two 3.5mm sockets – one for your headphones and another for connecting external sources, such as the audio output from a smartphone.

In use, the Stride works well. It’s not as dinky as the likes of an AudioQuest DragonFly, but it sounds good nevertheless.

Furutech ADL Stride review: sound quality
Stream a 320kbps version of Neka’s Heartbeat and there’s decent space around bass, strings and vocals, although the track lacks the rhythmic precision of the best devices at this price. There’s no edginess or thinness to highs, and lows sound weighty.

Increasing the bitrate to a WAV file ups the sonic ante to give a small jump in insight, detail and dynamics, while using a smartphone with the 3.5mm jack and then out to a pair of headphones brings an subtle increase in clarity.

This is a pretty unattractive and over-elaborate way of using the Stride, though – and we’re not sure how many people would actually do this in practice.

Furutech ADL Stride review: verdict
The Stride performs at its best with laptop-based music on the move, but there are more convenient, cheaper, and better-sounding alternatives out there.