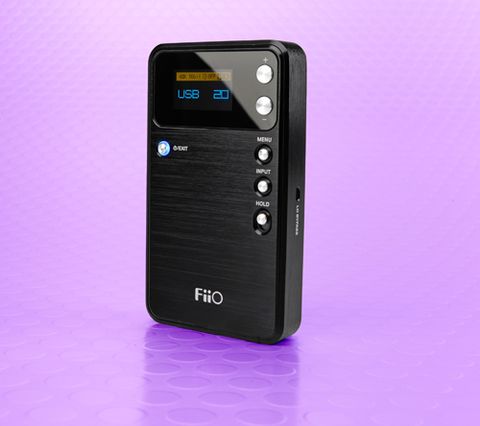 The Fiio E17 looks more like a portable MP3 player than a petite headphone amp/DAC.

Nevertheless, it’s still portable enough to slot in your pocket and be considered in the same class as the DragonFlys and D3s of this world.

The E17 picks up early bonus points as it manages to pack in a lot of features and functionality for the money.

The most obvious inclusion is the small OLED screen. Where other devices in its class use (sometimes confusing) colour-coding systems and minuscule LEDs to show sampling rates, you can take a quick look at the display here to double-check what’s being played.

There’s a mini-USB input for connecting to your computer’s USB socket. As the Fiio only meets the USB 1.0 standard it can’t accept any files above 24-bit/96kHz.

If you have 24-bit/192kHz files, you’ll need to go into the E17 via its dedicated digital input, using a coaxial cable and the supplied adapter. If you use optical, bandwidth is limited to 96kHz.

Either way, you can also take the feed from another source such as CD player and use the Fiio’s internal DAC before passing music into an amplifier or straight into a pair of active speakers.

Talking of amplifiers, there’s a special connector on the bottom of the E17 which docks into Fiio’s own optional E09K desktop amp.

There’s also a 3.5mm jack so you can plug in a smartphone or MP3 player and use the Fiio as a basic headphone amp.

Play a 16-bit/44kHz rip of Naughty Boy’s La La La and the track flows along efficiently and without incident. The Fiio’s tonal balance is more pleasant and pacifying than forward and aggressive.

Listening through a pair of AKG K550s, strings sound delicate and intimate, and bass notes sound just punchy enough to communicate the upbeat tempo of the track.

Move up a level to a high-res version of The Rolling Stones’ Gimme Shelter and the amount of detail on tap goes up too.

The Fiio conveys this newfound resolution reasonably well. Keith Richards’ wailing guitar solo sounds suitably edgy and sharp, even if it doesn’t quite have the same dynamic and emotional reach as AudioQuest’s DragonFly v1.2 or Cambridge Audio’s DacMagic XS.

We’d like greater clarity, too: the DragonFly opens out the music, giving spacious, transparent and detailed sound.

The E17 digs out just enough detail from music to strike a chord and paint a basic picture for the listener, but struggles with those subtle nuances that really drag you into a piece of music.

We had good results turning the E17s volume all the way to maximum and just hiking up our MacBook Pro’s volume a couple of notches.

There’s a subtle increase in spaciousness and dynamics, but still not enough to elevate it above the class-leaders.

Lorde’s Royals sounds reasonably exciting but the bass could explode

with greater purpose and power.

The Fiio doesn’t really communicate the dynamics and scale of the track as easily as the likes of the DragonFly.

On paper, the Fiio is a useful little box of tricks and some of the added features and functionality might entice some users.

Compared with its closest rivals, however, the sound quality doesn’t set the pulse racing. The E17’s an adequate listen, but nothing more.