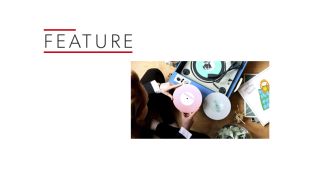 When we explored the surprisingly dense market of vinyl subscription services around this time last year, we found it to be more than a means of bulking your record collection without the often-futile practice of crate-digging.

For its part, Hurd (launched in 2016 and now nearing its 20th edition) is a platform for discovering new bands, more than those eventually pressed to vinyl, and for having a say in which exclusive 7ins end up on your turntable. For artists, as well as the obvious exposure, it can be an otherwise-elusive opportunity to have their music cut in physical form.

It was one of the 13 services we covered in our article 12 months ago, at which time it was also offering craft beers and ciders as part of its package.

Meeting founders Gabby Barrett and Jack Miles recently in London, we found out why their model changed, how that's benefited what they do, and how a podcast turned into caravan renovation. Plus we mull over their ideas for the future.

What Hi-Fi?: How did Hurd begin?

Gabby Barrett: I was working at Sky in TV production, Jack in radio production…

Jack Miles: I was working for the BBC in Gloucester, I was doing that for about two years then got kind of tired with that, so I quit that job and went freelance - then started setting up the business as well. So I moved back in with my parents, in the middle of Gloucestershire where nothing goes on, and decided to set it up and give it a go.

WHF: Why did you set it up? Where did the idea come from?

GB: Jack was doing a podcast while we were at uni, and has always been into new music and pulled me in that direction, so I started working on the podcast and we started doing it together.

From there we decided we wanted to do something a bit more, and we bought a 1970s caravan which was in an awful state - so we renovated it through YouTube tutorials and started recording sessions with artists. I filmed it and Jack did the sound – mainly people who were going through Bristol on tour. Then we decided we wanted to do a bit more again, so we started doing the record club.

WHF: We covered Hurd last year and you were doing the beer and cider then: was it just about money, the reason you stopped?

JM: The value for money was really tricky, because we were trying to do it for £20 or so - and the records aren’t cheap to press, the beers aren’t cheap to buy and shipping on top of that was just going up and up and up.

Every three months they’d raise the shipping for us, so about £5 of what we were selling it for was going on shipping, which we just couldn’t sustain. It’s a really boring reason to have to stop it, but we can now ship via Royal Mail and it makes it easier to afford.

GB: And it really took away from doing the music, because we’d spend so much time trying to find four really awesome craft beers and get them for good money: it was really taking over. And now that we’ve stopped and introduced the member votes, where members decide what we press from artist submissions, it’s more time for the music. Which is how it should be.

WHF: Did starting with the drinks combination help with getting an initial core of subscribers?

JM: It’s weird, we got a load of subscribers in Italy from doing the drinks – we probably got 30 to 40 subscribers just from Italy straight away – which was really odd. Since we moved away from doing the craft drinks, they’ve all gone basically, so they obviously liked that.

Something in the faff

WHF: How did you pick the artists initially, before the member vote system?

GB: The first was Trudy and the Romance, who we both really liked, but it just depends on the management I suppose, and who was up for doing it. We don’t take rights away, so it’s not doing them any harm, it’s giving them free records they can sell on, so in the start we just picked artists we really liked.

I think the majority of them haven’t been pressed, which is really nice - some artists we’d press a brand new track and one of their popular tracks. So that track would never have been on vinyl otherwise.

WHF: Are you fans of vinyl anyway?

JM: Yeah that’s kind of why we ended up doing it, as well as the passion for finding new bands. You’ll know it yourself, when you find a new band and you want to tell your mates about it straight away, and you want to be the first person onto it.

And also record collecting is great, there’s something just about buying music on vinyl – I don’t know what it is about it, but it’s about having that collection and having something physical in your hand you can hold onto.

And it’s annoying, don’t get me wrong, it’s a right faff, but there’s something in the faff that makes you want to listen to it and enjoy it. There’s a charm about it, rather than just pressing something on your phone and it just playing out.

I started my record collection when I was in school, because there was a really good record shop near us, so my friends and I would skive off school in the afternoon and we’d go crate-digging. But I think everyone who collects records starts off on their parents’ record collection, rooting through and seeing what they can find. My parents had Elton John, a couple of Dire Straits albums, The Beatles’ White Album – everyone has that one – Thriller, all the usual kind of things. Tubular Bells is usually in there as well.

WHF: So once an artist has been voted to be pressed, what’s the process from there?

GB: The majority of the time we take artist submissions, but I will still approach artists and managers and see if they’d be interested – every week we have our new music playlist, which is a lot of scouring SoundCloud. Then we pick five of our favourites, which go to the member vote. In the past we’ve worked with collaborators, so we’ve done one with Reverb Nation, one with Drowned In Sound, where we’ll send them an initial list and they’ll pick five.

Then members have a week to listen to the two tracks we’re going to press and read about the artist, then that’ll be the release for two issues time. Most artists have their original single artwork, so we’ll work on a back cover and we’ll do it together.

WHF: And where do you get it pressed?

GB: We use a company in Essex, who get it pressed in the Czech Republic. It’s just so expensive. When we first started we were like, “UK only, it’s going to be great”, and it’s just not possible.

JM: And I think there’re only two proper pressing plants in the UK, so you have to go abroad. It’s just not cheap, and that’s the thing.

WHF: And has the quality of the press always been okay?

JM: Our first one was a disaster.

GB: We opened it up, it was already about three weeks late, all in black when we’d ordered bright pink, so we just had to put it in the box. That was a nightmare, but other than that they’re quite good.

GB: We get test pressings through first, then try the real ones. If anything I think the quality’s getting better. On the first ones there was quite a bit of crackle, but now even the test pressings are improving.

WHF: And is there an archive for the old records?

WHF: So is the plan to expand on the same model, or is there scope for releasing LPs?

JM: That’s one thing I want to move to in the future. Because if you look at the States there’s Vinyl Moon and Vinyl Me, Please, and there’s also one called Feedbands who work on a similar model to us, then talk about getting an album pressed.

I think that’d be a really nice package - to get an artist we worked with a few years ago to then have them release their album. That would be the next step for us, but it’s making the step up to that next level.

GB: We’ve talked a lot about that, but the artists we work with at the moment... we like to stick to really emerging artists, and they’ve not necessarily got the tracks. But as we said, it could be someone we’ve worked with, but maybe not every month.