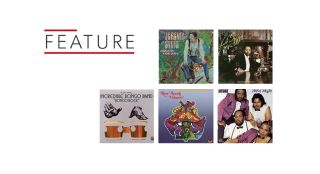 As Grandmaster Flash took What Hi-Fi? back to his teenage years, when he began stitching seconds of tracks into minutes-long beds of music, we thought about all of our favourite hip-hop tracks – and many from other genres – that likely wouldn’t exist without the technique.

Many of these tracks have become made more famous as samples than in their original form, so we decided to trace some of them back for you here.

“When Kool Herc found Apache, he was under heavy guard,” Flash told What Hi-Fi?. “You would never see the album cover of where it came from.” Such was the competition between hip-hop’s early DJs to find that special break.

The Incredible Bongo Band track has since sired perhaps more tracks than any other piece of contemporary music, and in 2012 its influence was documented in the film Sample This.

Bob James - Take Me To The Mardi Gras

Finding Bob James's Take Me To The Mardi Gras was Flash's own 'Apache' moment.

"I too was under heavy guard, so you wouldn't know what that was", he told us. "It's an extremely joyful thing, especially when you find a few and you are like the Don for a couple of weeks because all your competition doesn't know what it is that you have."

Flash took the sample to the studio for his track Freelance, with that iconic drum break later used by hundreds of artists from N.W.A. to The Chemical Brothers.

Roy Ayers - The Boogie Back

N.W.A’s F**k Tha Police wasn’t only censored upon its release in the late 1980s (and by this very website even now), but garnered communication between the group’s record company and the FBI for its perceived misrepresentation of and incitement of violence towards the police.

The seminal track, which protests police brutality and racial profiling, was built on a sample of Roy Ayers’ The Boogie Back.

Buy Change Up the Groove by Roy Ayers from Amazon

Michael McDonald - I Keep Forgettin' (Every Time You're Near)

Afrika Bambaataa used I Keep Forgettin' for his track Cosmic Punk Jam in 1982, but by far its most famous use is by Warren G and Nate Dogg in Regulate a dozen years later.

Though the former Doobie Brothers singer's orginal achieved its own success, peaking at No4 in the Billboard charts, Regulate – which also samples Bob James's Sign of The Times and Let Me Ride by Dr Dre – actually beat it by two places.

Buy If That's What It Takes by Michael McDonald from Amazon

Another track that has lent itself to multiple samplings, George Clinton's Atomic Dog is most famously referenced in Snoop Dogg's Who Am I (What's My Name)?

The song is sampled throughout, with the chorus re-imagined to become "Snoop Doggy Dogg", but it isn't the only Clinton track present: Parliament's Give Up the Funk (Tear the Roof Off the Sucker) and P. Funk (Wants to Get Funked Up), and Funkadelic's (Not Just) Knee Deep all stamp their mark.

The Notorious B.I.G.’s first single from his debut album Ready To Die – Biggie’s story of growing up through poverty, to dealing drugs before artistic recognition and financial success – sits on a bed of Mtume’s Juicy Fruit.

Produced by Poke of Trackmasters and Sean Combs, Juicy actually uses the instrumental version of the track, with girl group Total singing an alternative version of the original chorus.

Buy Ready To Die by The Notorious B.I.G. from Amazon

Ponderosa Twins Plus One - Bound

In an interview with Rolling Stone, executive producer Rick Rubin described how this Ponderosa Twins Plus One track almost didn't make it onto Kanye West's Bound 2.

"The whole song was written without that main sample, it was a last-minute thing," he said. "The song had kind of a lot of R&B music in it. And Kanye gave marching orders of, 'take out anything you want, but don't add. Just take away.'

"Before that, we listened to the sample together and thought, 'Hmm, maybe there's a way to integrate this into the song.' And the lyrics he wrote were so good and funny. It just turned into a really good record. The sample is so good."

Buy 2+2+1 by Ponderosa Twins Plus One from Amazon

Leon Haywood - I Want'a Do Something Freaky To You

Dr Dre and Snoop Dogg's Nuthin' But a G Thang was one of the 500 greatest songs of all time, according to Rolling Stone's December 2004 cover story. (Perhaps unsurprisingly, the list was topped by Bob Dylan's Like A Rolling Stone followed by (I Can't Get No) Satisfaction by The Rolling Stones.)

Reaching No2 in the Billboard charts, it was the first single from Dre's solo debut, The Chronic, the sleeve notes of which wrongly credited an L. Hayward with the main sample.

Buy Come Get Yourself Some by Leon Haywood from Amazon

Buy The Chronic by Dr Dre from Amazon

Dr Dre’s use of this track on Eminem’s 1999 hit My Name Is was originally vetoed. “Attacking two of the usual scapegoats, women and gays, is lazy writing,” said Labi Siffre, who is openly gay. “If you want to do battle, attack the aggressors not the victims.”

The London-born singer finally approved after Eminem made changes to his original lyrics.

Buy Remember My Song by Labi Siffre from Amazon

Buy The Slim Shady LP by Eminem from Amazon

Billy Squier’s The Big Beat has been sampled more than 280 times according to WhoSampled.com, by artists diverse as Beck, The Prodigy and Alicia Keys.

Perhaps the best-known uses are by Dizzee Rascal, who sampled it heavily in 2003 for Fix Up, Look Sharp, and in Jay Z’s Rick Rubin-produced 99 Problems the following year. Former Beggars & Thieves drummer Bobby Chouinard plays the famous beat itself.

Buy The Tale of the Tape by Billy Squier from Amazon

Buy Boy In Da Corner by Dizzee Rascal from Amazon

Buy The Black Album by Jay Z from Amazon

The Clash - Straight To Hell

It was producer Diplo who decided upon Straight To Hell as the sample for M.I.A.'s Paper Planes, with all members of The Clash creditted as songwriters on the track.

A year later, Paper Planes itself was sampled by Kanye West on a track named Swagger Like Us, which he produced for T.I.'s album Paper Trail.

Buy Combat Rock by The Clash from Amazon

Buy Kala by M.I.A. from Amazon

The Knack - My Sharona

Run-D.M.C.'s use of The Knack's My Sharona for their 1987 hit It's Tricky had the group in some legal hot water after it was found almost 20 years later that they'd sampled the track without permission.

The case was settled out of court in 2006, by which time My Sharona had returned to school discos across Britain thanks to its use in Girls Aloud's No Good Advice.

Funky Drummer is a track just calling out to be sampled, which it has more than 1000 times – and more than once by Public Enemy.

Likely its most famous use provides the drum track for Fight the Power, one of the greatest songs of all time in any genre, which even references the "sound of the funky drummer".

Buy In the Jungle Groove by James Brown from Amazon

Buy Fear of a Black Planet by Public Enemy from Amazon

Joe Simon - Before the Night Is Over

While Ms. Jackson undeniably drove the success of Outkast's fourth studio album, Stankonia, by our reckoning that record's finest cut has to be So Fresh, So Clean.

It samples Joe Simon's Before the Night Is Over, with Sleepy Brown singing altered lyrics of, "Ain't nobody dope as me, I'm dressed so fresh, so clean".

Buy Easy To Love by Joe Simon from Amazon

Buy Stankonia by Outkast from Amazon

Played by jazz flautist Jeremy Steig – who, we’re reliably informed, also played The Pied Piper in the film Shrek Forever After – Howlin’ For Judy is an infectious piece of musicianship that lent itself perfectly as the sample that formed the crux of Beastie Boys’ Sure Shot in 1994.

Buy Legwork by Jeremy Steig from Amazon US

50 of the best hi-fi albums for audi