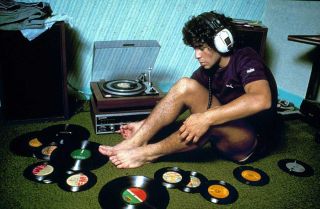 If you head down to your local record shop this Record Store Day, there's the slimmest of chances you'll bump into a snooker legend-turned-DJ, the original Joker or even His Royal Highness the Prince of Wales. Check out this gallery of some of the most famous vinyl junkies in the world.

This is precisely how we hope all famous actors listen to vinyl.

There was a time before the iPod in which analogue ruled the airwaves for Apple's co-founder.

Without a cause (or much furniture), but James Dean had his priorities sorted when it came to vinyl.

"Show us how you listen to records." Marlon Brando displays why he was widely dubbed The Godfather of Organic Poses.

Oh, this? Just Eusébio shopping for records before the 1968 European Cup final.

Today's youth are rediscovering vinyl, but they'd still find it difficult to comprehend what an absolute specimen El Pibe de Oro once was.

Few sportsmen merit being among Eusébio and Maradona in a list of any kind, but the six-time snooker world champion-turned-DJ is undoubtedly one.

You could wish for few better advocates of vinyl records than this film and fashion icon.

Here is what a seven-inch record looks like in the hands of a hobbit.

...and as well as a sense of adventure, it seems passion for vinyl also runs in the Baggins' genes.

Vinyl isn't perhaps the first kind of junkie you'd associate with the works of Irvine Welsh, but the Trainspotting author undoubtedly owns a record collection of which to be envious.

Sophia Loren listening to vinyl, looking at photos of Sophia Loren. No further questions, Your Honour.

We had to crop this photo of Andy Warhol because he wasn't wearing trousers and had a hole in the seat of his underpants.

Each birthday, Prince Charles is allowed three friends over to the Palace and they listen to records in his bedroom. [citation needed]