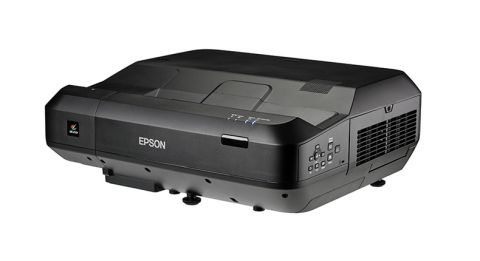 The joy of the ultra-short-throw projector is that you don’t need a large unit permanently fixed on the far side of your room, or hanging upside down from your ceiling.

The advantages of using a laser, rather than a conventional bulb, for your projection needs are a joy too: a laser lasts up to ten times as long as a bulb, the colour intensity remains consistent throughout the laser’s life, and they produce very bright pictures.

They also need comparatively little servicing throughout that 20,000-hour (or so) lifespan - and there's no bulb-change required.

So a unit combining the two desirables of ultra-short throw and laser projection is an enticing prospect – and that’s what the Epson EH-LS100 offers.

Place this unit 6cm from a wall and it will provide you with an impressive 70in screen (you’d struggle to find a 70in TV for anywhere near its £2700 asking price). Pull the LS100 a further 44cm away from the screen, however, and you’ll be basking in a glorious 130in Full HD image.

You’ll note it's Full HD, not 4K. For the very latest in tech, you’ll need to spend an awful lot more on a short-throw projector – although you can get a conventional unit that will fulfil your 4K needs for around this near-three-grand asking price.

But, of course, you can’t stick it just a few centimetres from the image. So we’re certainly talking horses for courses here.

The Epson's inputs should suffice for almost all needs. They include three HDMI inputs and USB ports, VGA in/out and composite video.

There is also a chunky, functional remote control more suited to an office than a home environment – but it works well enough.

Set-up basically consists of positioning the unit down square to the wall or, ideally, screen. Distance from the surface determines screen size on view – from 70in to 130in – so the furthest away from the wall the unit will need to be is 50cm. In many rooms it will be much closer than that.

Another benefit of a laser projector is the quick warm-up time when you turn it on. Though it’s slower to come up with an image than most TVs, you could be happily settled in and watching something in the time it takes most conventional projectors to warm up and make themselves available for use.

Once your image is visible, you can make the picture pin-sharp by using a focus slider hidden beneath a flap on the side of the unit. You will need to spend some time on getting the projector precisely square and level. It’s worth the effort, and not too taxing a job.

And that’s pretty much all there is to it. Should things not be absolutely spot on, you do have the option to adjust the vertical and horizontal keystone, which means you can get away with things being a touch skew-whiff, but we find (with a bit of gentle persuasion and persistence when it comes to shifting the unit around) we don’t need any digital correction.

We stick a Blu-ray of The Wolverine into our Cambridge Audio Blu-ray player and are impressed with the results.

The benefits of the brightness of laser projection are clear from the off. With many traditional projectors we’d barely be able to make out a watchable image with the room lights on, but with the Epson we can comfortably watch a movie in fairly bright ambient light.

This, of course, means the EH-LS100 could take the place of a television far more easily than a traditional projector can – there’s no immediate need to close the curtains and dim the lights to watch The One Show, for example.

But projectors are at their best with the lights down low – and it’s in this environment the Epson excels. It serves up a nice, crisp image, with punchy, bright colours and good fine detail.

The individual hairs in Logan’s beard in The Wolverine, for example, are clearly distinguishable. The colour palette is impressive, too, with believable skin tones and reds, oranges and blacks in many of the movie’s action scenes coming across as vibrant but realistic.

There’s an impressive lack of picture noise (that laser again), and the image is remarkably bright. While in many ways that’s a strength, there is a lack of absolute subtlety about the brightest whites.

When Logan is on a bus, for instance, the brightness of the world outside, seen through the windows, is more one big mass of ‘bright’ rather than subtle, realistic gradations of brighter hues.

Black reproduction is acceptable, but again lacks the subtlety of the best conventional projectors (and certainly of a 4K HDR unit). Motion processing isn’t up there with the very best, but doesn’t affect our enjoyment of a movie or sporting event.

Our final caveat is image processing - it's sometimes apparent, with a layering effect occasionally making some scenes look as if they’ve been shot using green-screen technology. Again, though, this isn’t a major issue, and certainly wouldn’t stop us recommending the EH-LS100.

The EH-LS100 has a 16W speaker built in to it, so you can watch a show or movie using the projector without any supplementary sound. While it does a serviceable job, and goes reasonably loud, it inevitably doesn’t match a good soundbar or surround system powered by a decent AV amp.

It’s worth mentioning this projector can be quite noisy in operation. With the picture at its brightest, the fan noise is potentially intrusive. You can reduce this by choosing a lower-powered picture setting, but a decent separate sound source solves the problem anyway.

The Epson EH-LS100 is an extremely competent projector. Amongst its many strengths are a very bright picture, ultra-short-throw capability and that relatively maintenance-free laser.

Your £2700 can buy a better image – and 4K projectors are starting to become available at around that price – but not the same convenience.

If you don’t want or need a permanently placed projector, we can’t think of any other option that ticks as many boxes as this. For the right buyer, it’s a winner.