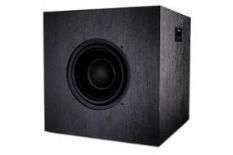 It might not have the visual flair of other Eclipse products, but the TD725SW doesn’t lack for sonic talent

A plain square box from Eclipse just doesn't feel right: the brand best known for elaborately engineered egg-shaped speakers has now produced what, from the outside, looks like a very ordinary big subwoofer, save it uses two 25cm drivers, rather than one really big unit. A look at the plain black finish and lack of flair to the slab-sided cabinet, and it's easy to get the impression that the price-tag is a little optimistic.

Delve into the details, though, and things look better. The TD725SW comes with a remote, and has pretty much every connection you're likely to need, be it balanced, speaker-level or plain old line-in. There are also switches to remove the internal crossover for a purer (and better sounding) signal path.

But it's not until the sub is used in anger that you'll realise it's something special. Play it as loud as you like – easy, thanks in part to the impressive internal 500w digital amp – and the substantial cabinet stays inert.

You'll need a toolkit to understand why: take the TD725SW cabinet apart, and you'll see Eclipse hasn't forgotten its maverick ways – the two in-phase drivers are braced by a thick aluminium shaft, which cancels any vibration created by them.

Design eschews the norm
Neither driver is bolted to the cabinet in the customary sense: instead, they are sealed by a combination of felt and isolating material, once again minimising the amount of energy being fed into the cabinet.

Simply put, less cabinet vibration equals a cleaner, clearer sound. And that's how the TD725SW sounds: clean, clear and very fast. It unravels low-end information, be it the seismic shifts of Massive Attack or the rumbling of a Lord of the Rings battle scene, with the utmost precision and agility. Some rivals deliver more authority and weight at the lowest notes, but the trade-off is a significant loss of insight.

It's not cheap, and the Eclipse makes life difficult for itself by looking so dull. However, build is good, and sonic performance is the best we've heard at this price level, which is why the TD725SW gets a hearty recommendation for use both in and out of Eclipse-based systems.