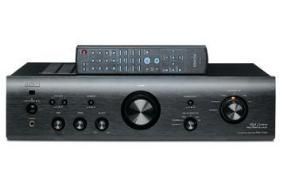 The best Denon stereo amp in ages is built to thrill

It's been a while since we wrote a review of a Denon stereo amplifier without struggling for variations on the words ‘workmanlike' and ‘so-so', so it's with a mixture of pleasure and relief we're able to say, from the get-go: the new Denon PMA-710 is really rather good.

In a world filled with prosaic lookers, the Denon's fascia contrives to look more cluttered than most – despite being a bit taller than the average.

Build quality is incontestable, the remote control clean and straightforward, and specification highlights include two tape loops among the five line-level inputs, switching for two pairs of speakers and a moving-magnet phono stage for use with a turntable.

Fifty watts of power per side is ample, but the PMA-710 features pre-outs for a power amp in case you disagree.

It's an uncomplicated, straight-ahead listen: The Honeydrippers' Impeach The President revels in the Denon's beefy, engorged presentation.

Detail levels are high, particularly through the sweetly realised midrange, and the PMA-710 shows a flair for timing that makes rhythms and tempos sound natural and unforced.

Detachable bass
Bass sounds are hefty and forceful but not without subtlety, and the soundstage is unified and explicit.

It doesn't take much (any hip-hop recording you care to mention, for instance) for that forceful low end to tilt from ‘ample' to ‘overbearing', though, and this trait is exacerbated by a slight hint of detachment – the very lowest notes sound a distance from the rest of the bass frequencies.

Of course, the very thought of a bass end you could use as a hairdryer is catnip to some listeners – so if your tastes are of the ‘thumping' variety you'll find this Denon very agreeable indeed.

Popular though a dominant bass presence is in some circles, we like a bit more equilibrium to our sound and feel there's a better balance to be achieved elsewhere.

But let's finish with things properly in perspective; none of the above alters the fact that this is the most enjoyable Denon stereo amp we've heard in yonks.