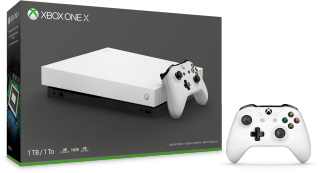 Spring has truly sprung, but due to the coronavirus pandemic, much of the world now finds itself social distancing and self-isolating indoors. So there's arguably never been a better time to take the plunge on an Xbox One S or Xbox One X should you spot a tempting deal.

In terms of retailers, there are plenty of options, including many of the usual suspects: Argos, Game, Currys, John Lewis, Amazon and AO.com all tend to have Xbox deals of their own.

Read on for the best Xbox deals, discounts and bundles (offers that include an extra controller, or an extra game or two as part of the package).

The Xbox One S upscales your current games collection to 4K resolution and supports HDR (High Dynamic Range) compatibility. The Xbox interface has never been better and the controller is superb, allowing you to immerse yourself in titles such as Call of Duty: Modern Warfare, Gears 5 and Forza Horizon 4.

Xbox One S 1TB All-Digital Edition Console bundle for £199 at Microsoft
The cheapest way to get your hands on an Xbox One, this version ditches the 4K Blu-ray drive in favour of downloads and throws in Minecraft, Sea of Thieves and the Legendary Rogue Spider Knight skin to use in Fortnite Battle Royale 2.View Deal

Xbox One S 1TB with Star Wars Jedi: Fallen Order Deluxe Edition bundle for £269 at Amazon
This is a great way to grab an Xbox One S with 1TB of storage. What's more, you'll be up and running with two huge blockbusters – all for a bargain price.View Deal

Want true 4K gaming? Look no further than the Xbox One X. Microsoft's range-topping console offers silky smooth graphics and fast load times. It also supports HDR, for improve blacks when exploring cities at night or creeping through shadowy buildings. And with improved 4K Blu-ray picture quality and Dolby Atmos support, the One X doubles as a family-friendly entertainment hub.

Xbox One X 1TB console with 3 month Xbox Game Pass for £349 at Currys
If you're looking for console-only deals, this deal at Amazon is your best bet. Don't forget you also get a wireless controller and a free 3-month pass for Xbox Games Pass thrown in as part of this deal.View Deal

Xbox One X 1TB Forza Horizon 4 Lego Speed Champions bundle £349.99 at Amazon
Bag yourself an Xbox One X console, wireless controller and get a copy of this fun-filled racing game as part of the package.View Deal