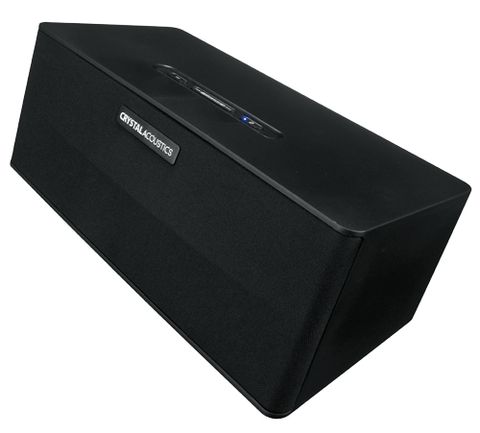 The Crystal Acoustics Bluebox is definitely on the inexpensive side – something that’s unfortunately reflected in its fit and finish.

The Bluebox feels cheap and insubstantial and not really up to scratch even at this price; little things like the Crystal Acoustics logo being stuck on at a slight angle don’t help its cause.

To prevent the speaker from appearing like a plain black box, the speaker is angled 15 degrees to fire up towards the listener, while the case has also been slightly tapered at the sides.

The Crystal Acoustics Bluebox feature list is basic, with just a 3.5mm auxiliary input included for hooking up kit that isn’t Bluetooth-enabled.

On top of the unit are controls for playback from mobile devices. These left us feeling confused on a couple of fronts: first, the play/pause button would pause tracks on our Android smartphone (in this case a Sony Xperia Z), but you couldn’t resume playback from the same button.

Second, there’s a longer button that controls volume and the ability to skip tracks. Tap the left or right hand side and tracks are skipped, but changing volume requires you to hold the button down for a couple of seconds, after which there’s a small delay before the volume shifts up or down.

It’s not especially intuitive and you often find yourself wanting to change volume just by tapping, but end up skipping to the end or beginning of a song by mistake.

Pairing with a source device, achieved by holding down the button labeled Bluetooth on top of the Bluebox, is relatively quick and painless. Once connected, hit the button once more and you can swap between different paired devices (the Bluebox can remember up to eight).

But it’s in its sound quality where the speaker really fails to woo. Streaming Bloc Party’s Vallis, the Crystal Acoustics Bluebox fires out a relatively clear vocal, but with a real bright edge, especially in the upper midrange and treble. Even when faced with a small increase in volume, the electric guitars harden up.

The speaker doesn’t kick out a huge amount of bass in open space, but it is rear-ported – put it close to a real wall and although there’s an increase in weight, the Bluebox now sounds boomy and uncomfortable.

Spend a few pounds extra and you’ll not only get a jump in design and build quality, but you’ll open yourself up to a world of speakers that sound significantly better than the Bluebox.

UPDATE: Originally reviewed at £65, the Crystal Acoustics Bluebox is now £45. The change in price doesn't change our verdict.