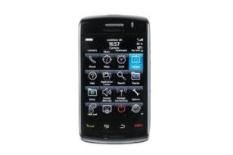 Blackberry hoped to rip open its business suit and reveal a versatile, multimedia solution for the man on the street – but it’s only managed sports jacket and jeans here

Research in Motion (RIM) has been working hard to bring its BlackBerry devices out of the boardroom and into the pockets of the masses.

Built on a background of unrivalled email access, the company is waking up to the idea of maximising web browsing as well as audio and video performance.

The Storm2 looks and feels like a weighty, premium product and marks the most obvious step into all-round entertainment territory. Unlike most BlackBerry handsets, it has a full, 3.25in, 480 x 360 screen.

The Storm2 also includes the company's SurePress technology but, sadly, this isn't a particularly good thing.

Clunky touchscreen
Rather than settling for the more popular (and, frankly, better) multi-touch screens, as seen on every other device here, this phone has a 'pressable touchscreen'.

You touch icons to highlight them, but then you must press the screen in to open them. This seems an unnecessary extra step and feels clunkier, while the inability to use multi-touch when it comes to web browsing is decidedly 'last-gen'.

Inside you'll find a 2GB embedded memory card, 256MB flash memory and the ability to add extra storage with an SD card.

Adding media content is simple via the Roxio Music Manager, or even better you can use the Media Sync to get tunes from your iTunes or Windows Media Player library. Happily you then need only to press 'media' on the main page to access your content.

Lacks punch with music
Aside from the touch-and-push control system, the BlackBerry OS 5.0 interface proves largely enjoyable. Although the screen is less visually impressive than that of rivals, it's fast to navigate.

We have more of a problem when it comes to music, movies and web browsing.

Sonically it's unable to uncover intricate details and lacks the body and punch of rivals, while video lacks insight and stability. The browser is better, but is slower to load and navigate than the likes of the iPhone.

The 3.2MP camera is well-specified with auto focus, zoom and video recording. As for the burgeoning
App World, it's no match for iTunes' offering but still has much to offer.

The BlackBerry Storm2 talks a good game, but as a smartphone focused around AV performance and internet browsing, it doesn't quite cut it.