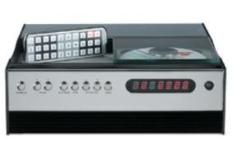 The Aura brand returns with a fine sounding all-in-one. It’s up against some tough competition, but is still worth a listen

You may remember the Aura brand: it used to be part of the B&W stable back in the 1980s, and delivered some top-class amplification back then.

Much has changed in the intervening years. The name is used now by April Music, sitting alongside brands such as Stello in the Korean company's portfolio.

Aura's new Note Premier is a well-specified all-in-one system. Alongside traditional sources such as CD and FM/MW tuner there's the now-essential iPod connection, plus a USB input to accept digital audio from a PC.

Style is a matter of taste
The main unit's build quality is pleasingly sturdy, though we have mixed feelings over the styling. Not all of us were bowled over by the extensive use of chrome, or its ability to pick-up fingerprints.

While we're complaining, the remote handset could be better laid-out, too.

Still, this is a good-sounding system. With CD it sounds fast, detailed and articulate: it does a fine job in unravelling Massive Attack's Heligoland.

Sure, greater dynamic expression would be nice, as would a higher level of transparency, but for a system in this class the Aura covers most sonic bases pretty well.

No DAB on the menu
The FM/MW tuner section is a good one, providing you can get a decent signal to it. Sound is nicely full-bodied, and smooth without being dull. However, it's a shame DAB isn't on the menu.

Still, using the USB input to accept a digital signal from a laptop is worthwhile, while the iPod connection is equally useful.

The Note Premier comes with an iPod cable as standard, but if you want a dock it's a £50 extra. We'd save the money: the standard cable does just fine.

All in all this Aura is a decent little hi-fi system. It's a worthy alternative to the likes of Arcam's Solo, even if it doesn't totally set our world alight.