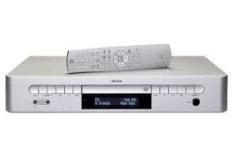 Great performance and convenience in one good-looking unit

The Arcam Solo has, for a while, been something of a benchmark system at this price level. True, this product wasn't the first all-in-one hi-fi to deliver great sound in a compact package, but it was the first to be a viable separates alternative, even for those who put sound quality first. That's why it has won Awards in the hi-fi system category in 2005 and 2006.

Even several years after its launch, the Solo remains as impressive as ever, and is even better in some departments. It still looks great: understated, but elegant enough to please even the most house-proud. Build is equally impressive, with the unit feeling solid and being beautifully finished. It was the case that the control buttons on the early Solos lacked precision, but this has now been fixed, and later models feel as good as anything quality rivals like Audio Analogue or Primare can offer.

The staggering popularity of Apple's iPod hasn't been ignored either, with Arcam selling a dedicated interconnect, the £60 rLead, that lets you control your iPod's functions via the Solo's remote control. This is a far better way of playing an iPod through a system than taking a cable out of the player's headphone socket and feeding it into a standard line input, which is what you do with many products. However, if you have a different MP3 player from an iPod that latter connection method is an option here, too.

Performance lives up to expectations
The Solo might be clever and stylish, but that isn't any good if the sound is poor. As you might have guessed from its complement of Awards, it sounds excellent, too. It's not perfect, with the unit offering a fairly traditional Arcam sound, which means the tonal balance is just a little rich and the midrange attack just a little muted for perfectionists. Yet, the pay-off is product that presents an incredibly musical and cohesive sound that works well with a wide range of music.

We played everything from Prince's When Doves Cry to Tchaikovsky's Symphony No. 2, and in every case the Solo refused to put a foot wrong. This system simply produces consistently listenable results, packed with detail and expressive dynamics.

Switch to radio, and the Solo keeps on impressing, with an insightful sound from its DAB tuner that's also free of the edge and thinness we've noticed in the past from some digital radios. FM is even more pleasing, bettering DAB's sound much of the time, though you'll need a good aerial – or to be in a strong signal area – to get close to digital's low background noise levels.

What more can we say? Arcam's Solo is a well-made, handsomely styled unit that sounds better than good for the type of product it is. As an ownership proposition, it's very hard to beat.