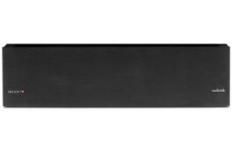 Audiolab isn't the first modestly sized hi-fi firm to find the inexorable onward march of home cinema technology tricky to keep up with.

We tested the forerunner to the 8000AP/8000X7 processor/power amplifier combination in our Awards 2006 issue, and found it to be a seductive listen hamstrung by a lack of modern audio- and picture-processing facilities.

Some 18 months later, Audiolab has tried to address some of our concerns, but that long a timespan is an eternity in modern home cinema terms – just ask HD DVD manufacturers. So are the changes timely, or too little, too late?

First things first: the 8000X7 power amplifier hasn't been modified at all. That's no bad thing, mind you, as the 'X7 remains a seven-channel power amplifier of considerable charm.

Dynamic and muscular sound
It's a very functional looker, seemingly built to withstand a direct hit from a 4x4. And in action, it sounds dynamic and tautly muscular when movie soundtracks get busy, offering casual authority over the most demanding loudspeakers.

Stereo music reproduction is equally impressive, the 'X7 communicating amiably and explicitly – fine detail is plentiful from the top of the frequency range to the bottom, a complicated song like Paul Simon's The Boy in the Bubble being delivered with verve and accuracy.

There's ample punch and drive, and though the top of the frequency range shines sweetly, there's never any danger of hard edges creeping in.

No high-def audio decoding
However, the problem here is if you partner the 8000X7 with the matching 8000AP processor, the latter lacks HD audio decoding.

Sure, it'll take PCM audio from your Blu-ray or HD DVD player, and yes, you can instruct said player to convert every form of sound stored on your discs into a PCM signal that the Audiolab can understand – but wouldn't you rather be able to listen to your discs' soundtracks in their unconverted form?

We're also aghast that, no matter which player we teamed it with, it wasn't able to to switch a 1080p/24fps high-def picture to our reference Pioneer screen.

This Audiolab kit still has its appeal if you've room for only one system, but while the multichannel power amp is great, the processor is the weak link in the chain. Buy the two components together, and we can't help thinking £2500 should buy more modernity than it can muster.