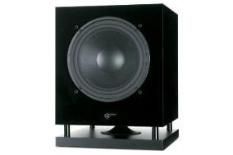 Still a worthy choice if you want plenty of thump from a compact box, but newer products have overtaken it

It's been four years since we first reviewed this compact sub from Swedish firm Audio Pro, but despite its age, it's still competitive enough.

The finish is great, and it's been thoughtfully engineered: its integral 'spreading lens' plinth is designed to control airflow from the downward-firing port and so avoid bass 'pooling' under the sub.

Wired and fired, there's plenty of output here: the B1.36 provides considerable extension with action movies, and devours the biggest excesses of Cloverfield with genuine authority given its modest dimensions.

But much as we first observed in our earlier test, music proves to be its undoing, the Audio Pro becoming too confused by the mind-numbing pace of The Prodigy's Warrior's Dance. Other, newer rivals are notably better in this regard.