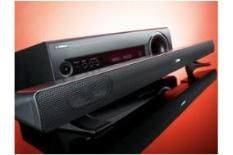 If being prepared to have a fresh think about something as straightforward as an affordable soundbar counts for anything, Yamaha deserves much applause for this product – even if it's capable of creating as many problems as it solves.

The soundbar itself, while certainly slim and discreet despite housing two 25mm tweeters and four 75mm drivers, is no groundbreaker.

And the need to wire it (six times) to the subwoofer makes it an altogether fiddlier system to integrate into your front room than other easily available soundbars.

Innovative subwoofer impresses
No, it's the subwoofer that makes the YHT-S400 stand apart from the herd.

It looks like a multichannel amplifier (albeit one with a great big reflex port at one end of the fascia) and as well as providing power to the soundbar it features three HDMI inputs, one output, digital optical and stereo RCA analogue inputs, a socket for use with Yamaha's YDS-11 iPod dock and an FM tuner.

Consequently it's able to handle inputs from your Blu-ray or DVD player, set-top box and games console, say, without any groping around to change connections.

Of course, a subwoofer configured like this is crying out to be put on an equipment rack (and the hardwiring to the soundbar demands it be close by), but a big speaker vibrating away among your electronics is hardly ideal.

Chunky, distinct dialogue
Receiving the soundtrack to sub-Lock Stock tall tale Smokin' Aces as multichannel Linear PCM via HDMI (and sending on the video without noticeably affecting picture quality), the Yamaha offers a clean, clear sound with the emphasis on the details.

Dialogue is chunky and distinct, the soundstage is well focused and substantial, and the sub/receiver offers meaningful presence even as it integrates smoothly with the soundbar.

Again, there's no convincing impression of surround sound here, but the Yamaha does at least manage to project a little further forward than its close rivals.

On occasion you might almost believe sound was delivered from alongside your seated position.

Clearly ahead of the pack
As an improvement on flatscreen sound, the YHT-S400 is pretty much off the scale – and when judged against other currently available soundbar systems it makes an equally compelling case for itself.

The Yamaha may be more expensive than its rivals, but the elegance of its thinking and (crucially) quality of its sound make it our preferred soundbar option.