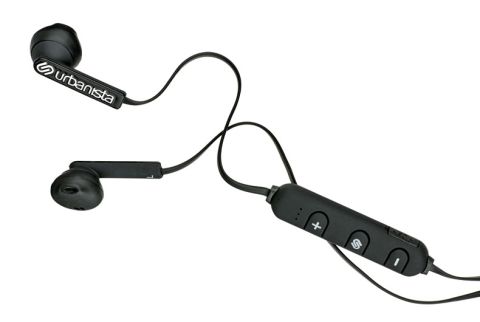 Good and bad elements but, crucially, sound isn’t one of the Urbanista’s strong points

The old advice on headphones is, don’t use the pair that came with your phone. Now tech fashion dictates you have to upgrade again, to a wireless pair.

The Urbanista Berlins are a lower-cost alternative to the Apple AirPods, adding a wire but subtracting around £100 at the same time. It’s easy to point anyone who’d like Apple AirPods, but can’t stomach the cost, to any old pair of wireless headphones and claim they’re an alternative. These Berlins might be, if they sounded better.

The Urbanista Berlins are earbud headphones rather than IEMs. This means the shell of the earphone itself sits in your ear, rather than just a soft rubbery tip.

These kind of earphones aren’t meant to block your ear completely but to just sit in them, using that little lip of cartilage in front of your ear canal to stop them falling out.

A yank straight down on the Urbanista Berlin won’t make them fall out, but pull outwards and they will.

You won’t want to fiddle about with the fit too often though, as while there’s a rubbery sheath over the earpieces it’s only thin and you’ll soon give yourself some ear discomfort - pretty common for this kind of design.

Other problems to consider include limited isolation. And as a result of the looser fit, the Urbanista Berlin leak some sound in the other direction too.

The design is good for runners who need to be able to hear what’s going on around them, but not so great for who want to block out the background noise to their commute.

Battery life is also fairly poor for a set with a battery built into the cable - just 4.5 hours. The battery lives in the remote housing, a not-too-big, not-too-heavy rectangle of plastic that also has three buttons to alter volume and track playback.

It’s a shame Urbanista couldn’t get the stamina up to a much more competitive six hours or so.

The wireless side of the Berlins is remarkably good for the price. Advanced features like NFC and aptX are missing, but the reliability of the Bluetooth connection is great.

Throughout testing there are virtually no blips or cut-outs. Good wireless performance in cheap Bluetooth headphones is becoming less rare, but it’s still encouraging.

The Urbanista Berlin are recharged using a little microUSB port on the remote, found under a little rubber flap.

There are good and bad parts to the Berlins, but the most important aspect - sound - is not one of their strong points.

They have large 13.2mm drivers that provide, in most respects, bottom-rung sound. The mids are crude and simplistic, with almost zero sophistication and lifeless delivery of vocals.

There’s nothing downright unpleasant about the midrange or treble. They’re not harsh, or so dramatically skewed they’re hard to listen to, but the fidelity is significantly worse than the best £20 normal wired earphones.

Bass is the real focus here, and thankfully the tone of the lower frequencies is slightly more enjoyable than the rest.

It’s big bass and encroaches on the mids a little, but it does have a smooth, plummy tone without ugly resonance or real boominess. It’s one of the positive effects of the sub-IEM fit, allowing the bass to dissipate more naturally.

But the Urbanista Berlins are not headphones to buy if you care a great deal about sound quality, particularly as there are many better-sounding options at the price or close to it.

The Urbanista Berlins are a lot cheaper than most wireless earphones, and it’s the price that is likely to draw you in.

But poor sound quality, short battery life and comfort that some won’t like makes them nigh-on impossible to recommend.