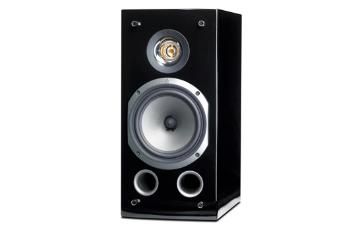 A good-looking speaker that isn’t afraid of telling you how it is, or how it should be. If you want to inject some energy into your music, give these Triangles an audition

French company, Triangle is celebrating its 30th anniversary with some limited edition speaker designs, including this Comète Anniversary pair.

This special version – only 500 sets will be made – includes a new horn-loaded tweeter, plus a modified crossover, and the use of high-end wires between connectors and crossover.

The speakers also sport a new logo, their limited-edition number and the signature of Triangle President, Marc Le Bihan.

Cut to the chase
The bi-wirable Comètes look splendid in their black, piano-lacquered finish, with Triangle's new tweeter impressing further.

We'd suggest placing them in open space – too close to a wall and bass can get boomy – and then you're ready to play.

The Comètes have a typical Triangle tone and delivery: tightly controlled, focused and up-front. Spin any genre of music and they get straight to the point.

They're like a boxer who repeatedly jabs into your midriff. With Radiohead's High and Dry, every guitar strum sounds extremely purposeful.

Directness can jar
However, their enthusiastic and determined sound comes at the expense of subtlety and flexibility to capture the essence of some musical styles.

All that urgency and directness can jar with more laid-back, emotional tracks, for example.

There's no doubt that the Comète's sound will appeal to some, but we can see these speakers rubbing others up the wrong way. In conclusion? A solid four-star speaker.