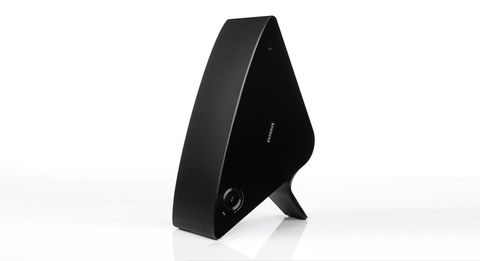 The Samsung M7 isn’t your standard wireless speaker. The triangular unit has myriad features to make it stand out: Bluetooth, near-field communication, internet radio, built-in wi-fi and the promise of a multi-room system.

The Samsung M7 isn’t your standard wireless speaker. The triangular unit has myriad features to make it stand out: Bluetooth, near-field communication, internet radio, built-in wi-fi and the promise of a multi-room system.

At £330, the M7 looks like one of the most versatile speakers on the market - but it isn’t without its ups and downs.

The Multiroom app is paramount to setting up your M7 with a network, as well as giving you playback and control options.

You can switch between inputs, select a streaming service, browse through internet radio stations or stream music from a different device. It’s not the slickest design, but it’s functional.

One drawback is that it doesn’t pull up the playlists from your smartphone’s music app; you have to create your own.

With multi-room, you can send a different song to each speaker, or group them to play the same song at the same time.

There are a number of ways to connect the M7 to your home network – you can plug it directly to your router using a wired ethernet connection; you can press the WPS button on the speaker and your router; you can use the wi-fi set-up and connect with your smartphone; or you can invest in a separate Hub (the WAM250, £50) that directly connects to your router and allows you to add speakers as you build a multi-room system.

It should be a simple process, but we have trouble getting the M7 to connect in our test rooms. Even taking into account our crowded testing network, it simply will not connect to our network using ethernet or wi-fi. Instructions on the online user guide and on the app are conflicting, too.

We’re sure the combination of LEDs and sound cues (none of which are explained) are there to encourage us, but we would like a more straightforward process.

We end up using the Hub, and after two resets and lots of patience, we finally managed to get at least two speakers connected to our network

Once you get past the confounded set-up and get your tunes playing, it’s a comfortable ride. The M7 bursts into life with power – the sound is big and loud, and easily fills up our large listening room.

The M7 does have a slightly tubby low end. It delivers rich bass, but it isn’t very deep, subtle or taut. It works with La Caution’s hip hop tune Thé à la Menthe, but not Tom Waits’s Swordfishtrombone – the haunting melody and beautifully textured basslines become a little messy.

The M7’s delivery isn’t the most precise, either, but there’s a warmth to the sound that’s comfortable to listen to. A rolled-off top end curbs hardness, which helps with low-resolution music or bright recordings. The midrange is clear and open, delivering a good degree of emotion when it comes to the vocal delivery.

When it comes to build, the M7 is solid - even if it is on the large and chunky side.

The curved edges and glossy-top finish look nice, and the rear-panel connections are neatly hidden under a plastic cover with holes to let the power cable through.

The triangular design is meant to look like a ‘play’ button, and can be placed either horizontally or propped up (a stand is included).

We prefer to keep the M7 flat, even if it takes up more space. Whichever position you choose, make sure you leave plenty of space in front of it so that the large spread of sound isn’t obstructed.

Controls are at a minimum, with small, touch-sensitive icons on the top panel, a touch-capacitive volume dial and a single LED peeking through the front grille.

Touch the icons to enable internet radio (you can toggle between three presets), Bluetooth pairing and TV SoundConnect (to link with compatible Samsung TVs).

They’re responsive, and the glowing icons are elegant. An icon for selecting inputs would be nice. The M7 has no physical power button, but it does go into sleep mode after around 25 minutes of inactivity.

The M7’s long list of features is its main selling point. Bluetooth is the simplest way to stream music from your smartphone or tablet.

Pairing is unfussy, while playing tunes from the likes of Spotify is hassle-free, too. A big advantage is you don’t need Samsung’s Multiroom app – you can simply use your smartphone’s own intuitive music app to play music (and retain playlists).

Android and Windows users can tap a phone against the NFC tag for an even swifter connection. Just make sure Bluetooth is also turned on for streaming.

Going down the wi-fi route gives you a longer range than you get with Bluetooth, and DLNA compatibility allows you stream from laptops and NAS devices, too.

As long as your device is connected to the same network as the M7, you can change songs or volume even if you’re in a different room.

Internet radio is one of the bonuses of the M7. The TuneIn radio service gives you a huge selection of stations, and you can mark out your favourites.

Picking the three presets is easily done via the app, too. Have a music player that doesn’t do Bluetooth or wi-fi? Go old-school and plug your device into the M7’s 3.5mm input.

While you can select the source or method of connection via the Multiroom app, we wish there was a way to do so on the M7 itself. Its file compatibility is extensive, too: MP3, WAV, WMA, AAC, AIFF, ALAC and FLAC music files.

The Multiroom app also gives you Spotify, Deezer and Napster, with Amazon Cloud Player to come.

It would be easy to allow our frustrations with the M7’s set-up processes to cloud our enjoyment, but all this is forgiven once we start playing music.

It’s not the most skilful, cohesive or detailed wireless speaker we’ve ever tested, but there’s no denying that we had a very pleasant time just listening to our various Spotify playlists.

At this price, the Samsung M7 has fierce competition from a wide range of wireless speakers – from the Award-winning Geneva Model S Wireless DAB+ (which is smaller in scale, but is subtler and more musical) to the Cambridge Audio Minx Air 200 (which has similar dynamic reach, but tighter control of bass and rhythms).

It’s not without fault, but the Samsung M7’s huge sense of scale, comfortable performance and excellent list of features makes it well worth an audition.