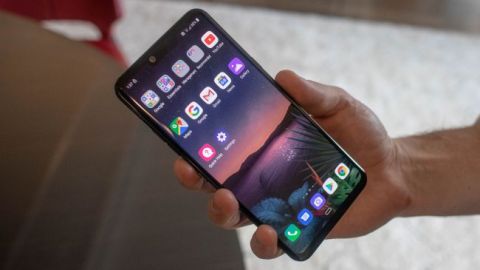 LG’s G8 ThinQ isn’t pandering to what's emerging as 2019’s top two smartphone trends: foldable designs and 5G support. But the next-gen G Series handset is looking to the future with another headline-grabbing spec: Hand ID, which rather bizarrely reads the blood in your palm's veins to unlock the phone.

While the trick up the sleeve of LG’s V50 ThinQ – also just announced at Mobile World Congress – is an optional second screen attachment, the company's forthcoming flagship (successor to the G7 ThinQ) is more concerned with a hands-off approach with gesture control features.

However, it’s the G8 ThinQ’s new 6.1in OLED display and innovative Crystal Sound OLED audio that boosts our confidence in LG’s 2019 Android flagship.

Our colleagues at TechRadar have been on the ground at MWC in Barcelona and shared their thoughts on the LG G8 ThinQ.

Ahead of MWC, LG revealed a flagship feature of its forthcoming G8: Crystal Sound OLED, which sees its OLED display working as an audio amplifier. Essentially, it repurposes the screen as a diaphragm, vibrating the entire surface to produce sound and thus eliminating the need for a top speaker.

It’s a method Sony has used in its AF9 and AF8 OLED TVs, and which LG itself has recently experimented with for its OLED TV technology. And hey, one less speaker means one less way for water to seep into the phone’s internals.

The vibrations aren’t big enough to feel distracting against your face, but it’s effective in producing a clear sound that, during calls, is more clearly heard towards the top end of the screen.

There is a speaker at the bottom of the phone, mind, which uses the internal space of the phone as a resonance chamber speaker in an effort to boost bass and volume.

The company’s smartphone output has for a long while showcased some impressive and way above-average dedicated audio design – a Hi-Fi Quad DAC, Meridian tuning, MQA support, aptX HD – and unsurprisingly that’s all been carried into the G8. Also onboard is DTS:X 3D Surround Sound, which is designed to emulate a 7.1-channel soundstage through its speaker or your headphones.

And yes, for those who were wondering, the G8 also keeps the 3.5mm headphone jack. We can't wait to plug our pair in...

The LG G8 rightfully complements that audio feat with a visual one. It has a 6.1in display with a notch, much like the G7, but swaps out an LCD screen for an OLED one. Needless to say blacks are deep, and also apparent in early tests is that the G8 goes plenty bright enough and boasts superior contrast.

We found the G7’s claimed 850-nits of brightness ideal for punchy hues and outdoor use, but it came at the expense of subtlety and detail. We look forward to seeing whether the G8 strikes a better balance in our full review, then.

In terms of design, everything else appears underwhelming familiar: a rear dual-lens camera, a rear fingerprint sensor and a metal chassis sandwiched by Gorilla Glass on the front and back. Like its predecessor and most current Android smartphones, there’s a notch at the top and a chin at the bottom. As we said of the G7 ThinQ, it’s a bit like taking a tour of your familiar local neighbourhood.

But wait, what’s that? Video portrait mode? LG’s G8 ThinQ is first to utilise the video mode offered by the Snapdragon 855 chipset that powers the phone, and is basically similar to portrait mode for photos - your subject is in focus, while everything in the background becomes blurred. We have to say we’re impressed with the initial results.

The rear dual-lens camera responsible for portrait video is made up of a 12mp standard lens and 16mp wide snapper, while the new-and-improved front-facing camera is an 8mp lens that we’ll also save scrutiny for in our full review.

On paper, the LG G8 promises to be a powerful all-day performer, with 128GB of internal storage (up from the G7’s 64GB and expandable via microSD card support), a 6GB RAM and a 3500mAh battery.

Perhaps less vital in practical use but as much a talking point is the aforementioned Hand ID, which shines an invisible IR laser at your palm in order to read the blood pattern in your vein. Say your phone is laid on a table and you can’t be bothered to pick it up, you can simply hold your open hand inches away and slowly move it backwards and the job’s done - well sometimes, anyway. It never worked for us on any first attempt, which naturally has us questioning its actual worth.

Air Motion gestures – mid-air signals to, say, change volume, take or dismiss calls, or turn off alarms or timers – worked a little better but took multiple tries to get right. Ultimately, both need a little work to be any sort of game-changers.

LG may have played it safe when it comes to design, and has probably focused too much effort on far-out features that are more vane than visionary. Considering the innovative new models from rival brands, 2019 may not be the year to take a cautious approach.

But that said we can’t ignore the innovation it brings in the audio department, nor would it be fair to overlook the improved video and camera specs.

The LG G8 ThinQ may not be the most exciting Mobile World Congress 2019 launch, but it does look like a solid next-gen flagship that LG fans in particular should be excited about.