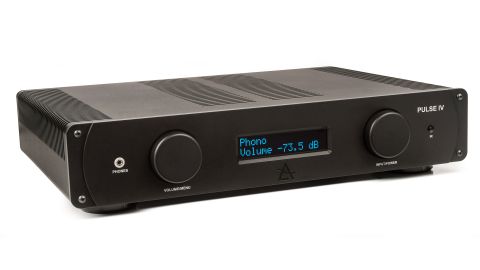 We wanted to like the Leema Acoustics Pulse IV, but while we enjoy some facets of its performance, overall, it leaves us unenthused

Contrary to what we like to believe, music and productivity do not make good bedfellows. We might enjoy ourselves more listening to music while we work, but really it is an extra distraction our brains have to work with.

Music isn’t really just about notes or harmonies, it’s about the way the notes are played, the rhythms and the feelings. Those basic elements that catch our attention and that, hopefully, distract us from what we’re doing. But it’s also something many audio products are prone to get wrong.

It’s always a shame when something appears to be painting by numbers – and that is where we find ourselves with the Leema Acoustics Pulse IV integrated amplifier.

There is much to be said in its favour – the Pulse IV looks and feels like an amplifier worth spending over two grand on. It has a pair of sizeable ornamental dials on a robust chassis, and it is far from lacking in features.

Its rear houses five analogue inputs alongside trios of coax and optical digital connections, as well as USB Type-B and phono ins – the latter for both moving magnet and moving coil cartridges. Outputs are available for two pre-amps, a single pair of speakers and, on the front, for headphones.

Wireless connectivity is catered for as well, via aptX Bluetooth, while inside the Pulse IV houses a 32-bit/384kHz DSD-capable DAC that aims to make the most of any hi-res files you feed it.

It looks and feels like an amplifier designed for serious audiophiles, and in many ways, sounds like that as well. The first things we notice are an impressive level of detail and clarity, and a rich midrange with plenty of body and weight in the low end.

There is pleasure to be found in hearing the textures of instruments, the keys of a piano sounding like more than just mallets colliding with strings. For sparse presentations, it can be quite impressive, offering up a sense of intimacy as little appears between you and the musician. It also highlights that step up between budget and mid-range components, as you dig into details of even the most instrumentally dense of pieces.

That bass, too, cannot be ignored. Its depth is perhaps surprising, even at this price, but more so it remains taut and lean enough for its tonality to remain on show. It bulks up the Pulse IV’s full presentation, and is complemented at the other end of the spectrum by equally rich highs.

But even though the balance is even, the performance feels disjointed. Timing and organisation are major issues, the Leema struggling to keep hold of a straight 4/4 beat or tie instruments together, despite the detail within each strand.

There is little sense of the amplifier locking into any kind of rhythm. It’s more a case of playing beats and notes at more or less the right time than stringing together any kind of coherent sentence.

Dynamically, too, the Pulse IV is disappointing. It is like a sponge, absorbing elements of expression into its body, without allowing anything to escape. It means subtle dynamics and grand shifts alike aren’t fully expressed, played instead at similar intensity for what at once might seem a composed presentation, but in the end lacks any kind of excitement.

We often leave products playing because it’s a wrench to unplug them, but with the Pulse IV it is more because we aren’t overly affected by its presence. We are able to work through it without being distracted, other than by occasional reminders of its often quite unnerving sense of timing.

This is the kind of price where we would expect a company such as Leema to excel, and indeed we have been fans of its products in the past. The Pulse IV, however, is disappointing. There are elements of its performance befitting an amplifier of its price tag, it's just that musicality is not one of them.

Read all our Leema reviews

How to combine stereo and surround sound in one AV system