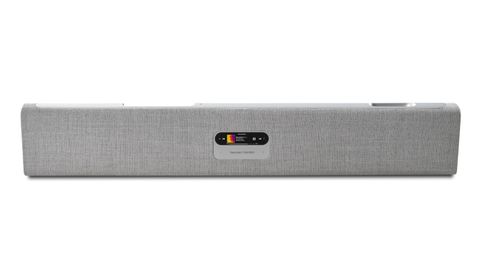 If you’ve listened to other Harman Kardon Citation products and liked what you heard, then the MultiBeam 700 could be the soundbar for you

Whenever we listen to a multi-room product, we want class-leading sound, of course, but almost as important is that its audio performance matches the DNA of its family members.

So in a strange way, though the Harman Kardon Citation MultiBeam 700 is one star short of a full complement, this is actually the perfect result. It fits seamlessly into a strong line-up of speakers, allowing Citation fans that want to match up their music and TV sound to buy with supreme confidence.

Not that the MultiBeam is a product only for those already committed to the Citation ecosystem: this is an extremely competent and feature-laden soundbar in its own right. The fact it stayed plugged in to our TV for so long after testing is testament to that.

So, what do you get for your money? The MultiBeam is the smaller, and less expensive, of two Citation soundbars, but that doesn’t mean it's lacking in features.

The headline is its surround sound technology. Using drivers at each end of the soundbar, as well as those facing straight at the listener, the Citation MultiBeam achieves a 5.1 effect seeking to envelope you in sound without the need for multiple speakers.

Unlike some rivals, these drivers can also be bypassed for more traditional stereo listening, which is a big plus – especially if you were to use the MultiBeam as a wireless speaker for your music, too.

Harman Kardon’s intention is for their soundbars to be used as part of a home entertainment hub, rather than for boosting TV audio alone. To that end, it has all the same streaming features as the other Citation speakers, including Bluetooth, Chromecast and Apple AirPlay.

There are fewer physical connections than on some rivals – one HDMI ARC connection, aux in and optical in – but there’s nothing else that’s absolutely necessary. A wired internet port might be nice, but the Citation has both 2.4G and 5G wi-fi transmitters, so it shouldn’t drop out if your signal is strong enough.

The cleanliness and simplicity of the design is one of its major fortés. There is a touch-screen strip across its crown – through which you can set it up, select inputs and the like – but there is a little you’d have to know in order to get it up and running.

One thing you should do is go through the automatic set-up, which sends out a series of audio signals to optimise the MultiBeam’s output for its specific environment. It’ll stop the surround effects crashing off nearby walls, and keep the output balanced even if one end is more boxed in than the other.

Familiarise yourself with the remote control, too. There’s a lot going on, including various sound modes that are worth fiddling with, though other than perhaps a minor EQ tweak, it will be mainly used for switching surround effects on and off.

That’s because you can use the built-in mic and Google Assistant to do most things hands-free, but also because once you’ve found a nice neutral sound, which with the MultiBeam it is quite simple to do, it is easy to just relax and enjoy.

It only takes a few minutes to realise the MultiBeam has that same welcoming, pleasant overall character as its Citation relatives – easy on the ear, though not without the ability to entertain.

Much care has been taken to avoid rough edges or sparkly treble – anything that may wear the ears – and there’s a satisfying amount of bass here that perhaps belies the soundbar’s 79cm wide frame.

The MultiBeam houses a pair of 25mm tweeters and five 5cm woofers, and they work hard to direct audio towards the listener with decent clarity. We’ve heard numerous soundbars attempting surround-sound, and this kind of direct presentation is often overlooked – especially at this reasonable price.

Instead, when you have the surround speakers working it just adds a little atmosphere and space. Is it true enveloping surround sound? Of course not. But it is a worthwhile addition that can help immerse you in what you’re watching.

Perhaps unsurprisingly, it is the same things that keep the MultiBeam from a five-star review that have done so with other Citation products we’ve heard – namely a slight flatness in terms of dynamic expression. Though it is perhaps not so much an issue with TV sound as it is when playing music, there’s also a less-than regimental sense of timing.

It isn’t that the MultiBeam is boring, as such. It just falls a step behind class-leading soundbars such as the Sonos Beam, which has fewer features but is also cheaper. It also leaves us wanting a little more when it comes to emotion.

We can forgive that somewhat, however, because the MultiBeam does have a lot going for it. And if you want the surround features, but can’t quite stretch to the Sonos Arc, it makes for a talented and cost-efficient substitute, and forms part of a highly competent multi-room family.