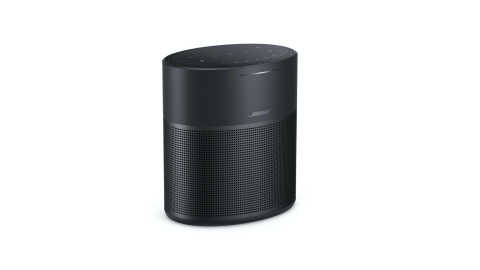 There are those who will be enamoured with the Bose Home Speaker 300’s weight and volume, but they are about the only things it gets right

Bose is undeniably a titan of consumer audio, and rightfully so. It is a leader in various markets, having pioneered and polished technologies we now know as standard across the products we use every day.

In turn, that garners much brand loyalty, and indeed blanket trust. So it is hugely disappointing when such companies – though Bose is by no means alone in this regard – delivering a product that is decidedly so-so.

The Home Speaker 300 appears to be one such product, because certainly Bose has the resources to make a smart speaker that is more than just functional.

We can have few complaints about it not sounding as good as the class-leaders in this market, and its performance is not truly appalling, but it lags far behind the best in class and we expect better from Bose.

Bose is rarely outgunned when it comes to features, and the Home Speaker 300 boasts an impressive array of them. Both Amazon Alexa and Google Assistant shoulder voice control duties – though there is no Chromecast built-in at the time of review – and there’s the option of using what is described as superior voice pick-up or turning the microphone off entirely for those times you don’t want to be heard.

You can stream music via the on-board Bluetooth or wi-fi, as well as Apple AirPlay 2, while popular music apps such as Spotify, Deezer, Amazon Music, Apple Music and TuneIn are all integrated for seamless use.

All of that music is held in one place by the Bose Music app, which makes it easier to jump between radio and streaming services without needing to launch each app separately, and multiple users can personalise their content on the same speaker.

It isn’t quite the class-leading level of Sonos’s app in terms of ease of use and wide-ranging functionality, but it more than suffices.

The app is also where you’ll be able to do some basic EQing, and configure your six presets that can be accessed via the top of the unit, along with playback and volume controls, Bluetooth pairing and aux-in selection.

Other than that, the Home Speaker 300 is relatively bereft of ornamentation, save for its strip light indicator that confirms that your commands are being heard.

That’s not to say we aren’t fans of the aesthetic. It looks very much like a modern-day smart speaker, in the way some rivals such as the Audio Pro Addon C5A don’t, but we’re always great fans of those products designed to be heard and not necessarily seen.

So what will you be hearing? Bose has opted for just a single full-range driver, which fires downwards into an acoustic deflector to spread sound 360 degrees from its ovular chassis.

This means you’re getting uniform mono sound all the way round, which is a canny idea when you bear in mind the numerous speakers that have tried and failed to deliver cohesive 360-degree sound from multiple drivers.

The problem is that uniformity is not exclusively positive. On the plus side, there is the scale and weight of the sound, which outreaches many competitors and is impressive for a unit of this size. You can push it to the limit, too, sending the volume toward the ceiling and still getting no hardness or brightness in return.

In terms of those basic requirements, Bose is rarely ever in doubt. If your concerns are solely to do with volume and sonic weight, then this actually isn’t a poor proposition. It isn’t going to stick out as the worst speaker you’ve ever heard, and nor are you going to be clamouring to turn it off.

But it isn’t going to stand out for any reason at all. The Home Speaker 300 has that fatal combination of being quite chaotically cluttered and confused, yet at the same time altogether lifeless. This lack of both dynamic range and a sense of timing might leave the keenest ears a little disoriented, but mostly it’s just going to sap the energy and vim from your music.

It is really quite dull, and not at all helped by a lack of detail and space. Not only are you being afforded such little expression and rhythmic organisation, but Bose isn’t really telling you much about textures or ambiance either. There is only so much insight one can gain from a speaker at this price and size, but that is still a way beyond what is being offered by the Home Speaker 300.

These strengths and flaws come to light without comparison, but are only further enforced when we place the Bose next to rivals such as the Addon C5A and the Sonos One.

The former is undoubtedly the most sonically complete voice-assisted speaker, an audition with which those going purely for sound quality should prioritise. Admittedly it is a different prospect in terms of form and features, but the Sonos One is not, and still the Bose cannot compete.

Fully signed up to Apple? The HomePod barely breaks a sweat in bettering the Home Speaker 300 in terms of features and sonic ability. Even Amazon, whose speakers are often hit and miss, can chalk a victory against this Bose.

However, the Home Speaker 300 still gets three stars, because the comprehensive feature list and weighty sound will obviously please many.

But this is Bose, who we know can do much better, and who will undoubtedly achieve a huge number of sales regardless. All we can do is warn you not to enter the market unthinkingly, and for this time just swerve any brand loyalty.

Save yourself the money and buy something better.