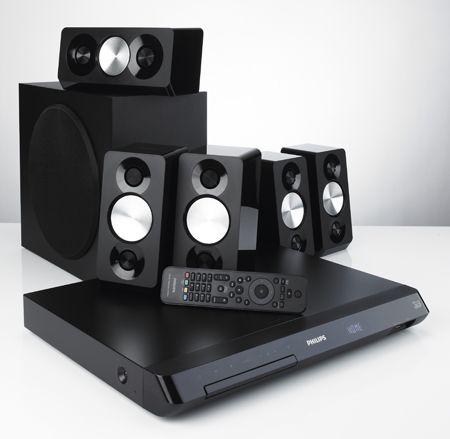 If space and budget are tight, then this Philips system is a super solution

Head to the Philips website and you’ll find this Philips HTS5563 home cinema system grouped under the header ‘immersive sound 5.1’. And that’s as good a mission statement as any for this type of product.

With the likes of LG and Samsung sure to pack in as many features as possible in to these devices, Philips does its best to keep its end up – but a couple of functions are missing.

There’s support for an iPod dock but it’s not bundled as standard, for instance, and there’s no Bluetooth connectivity. Still, it’s a sign of the times that we’re picking holes in what is still a well-equipped piece of kit.

There’s still the choice of two HDMI inputs plus an optical in, SD card and USB slots, and support for audio and video files. There’s also an FM radio.

The remote has a clear layout and is easy to use, even if some of the buttons feel a little clunky. It’s responsive to use, and a browse around the simple menus finds us in the NetTV offering and enjoying the excellent video quality on BBC iPlayer. So far so good.

Flick to a DVD or Blu-ray and the picture continues to look the part. Colours are subtle but still dynamic, detail is high and whites are clean, while blacks remain solid.

Only the fastest movements find the Philips blurring slightly to keep up, but as motion issues go it’s far from intrusive. With 3D films, such as Tin Tin and Cave Of Forgotten Dreams the picture is decent, with minimal crosstalk.

We’re also happy to report that Philips delivers on its promise of ‘immersive sound’. The identical satellites ensure excellent cohesion between each speaker – pick a film with plenty going on in the rear channels and you really do feel in the middle of the action.

There’s good detail too, the small speakers doing well to present a dynamic sound with good separation – though don’t expect room-shaking power. The sub struggles at boisterous moments if you crank it.

Regardless, it’s money well spent. Compact and stylish, capable of great sound and pictures, this is an example of why these systems make sense.