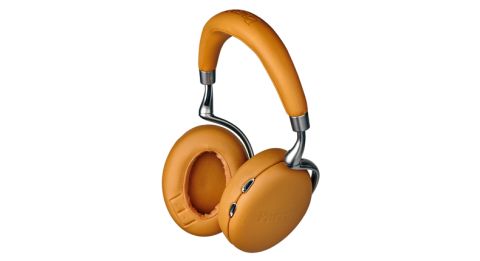 Everything comes with an app these days: AV amps, wireless speakers, streamers, Blu-ray players. But a pair of Bluetooth headphones? That’s a relatively new one for us.

The Parrot Zik 3.0s surprise us with their app (officially named ‘Parrot Zik’ and available on iOS, Android, Apple Watch and Android Wear devices), which lets you activate noise cancellation and unlock more functions. If nothing else, it shows Parrot is thinking outside of the box.

When noise cancelling is activated, the app shows how much ambient sound is being kept out in real-time (the Ziks claim to block ‘up to 30dB’). Battery status is handily displayed too, and you can fiddle with the pretty extensive EQ settings yourself or download existing presets by various music artists – we tried those from DJ Jazzy Jeff and La Roux – free of charge.

You can turn on text-to-speech, which automatically pauses music when a call comes in and accurately tells you who is calling too. And then there’s the more menial stuff: personalising the name and colour of your Ziks.

Probably the app’s biggest gimmick is a ‘noise map’ that pinpoints, in the same way post-apocalyptic zombie movies do with infected zones, the noisiest areas in the world, based on data collected from Parrot Zik users.

Away from the app, the Parrots have a couple more tricks up their sleeve. They automatically pause your music when you take them off your head and, taking wireless to another level, are compatible with wireless Qi chargers.

One isn’t included in the box – a microUSB cable is for standard charging, though – so that luxury will be an added expense.

A two-hour refill should get you 18 hours playback of noise-cancelling, although only six hours with Bluetooth activated too. That more or less tallies up with our results although needless to say we’d like more stamina from the Parrots.

It works well nine times out of ten, although any haphazard dragging (for volume) can be mistaken for tapping (for pausing).

Anyone familiar with the Zik 2.0s will be able to tell their successor a mile off. The French company has, in its words, created ‘a touch of couture’ with the oval ear cup designs this time.

There’s red, green, black or brown in croco effect, overstitched effect in black or ivory, and a black or tan leather grain finish.

Pretty boys indeed, the Parrots are well made and tidily finished. The matte chrome details you might see in a modern bathroom look rather lavish, and even the headphone socket feels of certain quality.

The pads completely encase your ears, a good seal providing a sense of isolation, and the headband is well cushioned. The stiff adjustment slider could be easier to manipulate when mounted, though.

There’s no questioning that the Parrot Zik 3.0s have plenty to offer the modern, choice-laden consumer. But what’s the point if sound quality isn’t up to scratch? That could have well been our closing line, as sadly this is where the Parrot’s lose their edge.

Strict balance, fair detail and a timely manner make them an innocuous listen. They have the gusto to bop along to the bouncy bassline and larger-than-life synth melody driving Broken Bells’ After the Disco, and enough weight to make the electrics in My Morning Jacket’s Big Decisions sound comfortably bold. Treble snaps up slicing cymbals, vocals are clear and focused.

Bass isn’t very pronounced though, and there’s not much going on dynamically. At this price they have a battle on their hands against the B&W P5 Wireless: solid, dynamic performers more rhythmically surefooted.

Where the Parrots feel congested throughout the cacophonous accordion playing in Mabon’s The Accordionist’s Despair, the B&Ws are more orderly with a greater sense of space and precision.

It’s a fair performance, just not one that’s going to place the Parrots high up the pecking order – even if they are one of the best-equipped cans we’ve come across.

See all our Parrot reviews