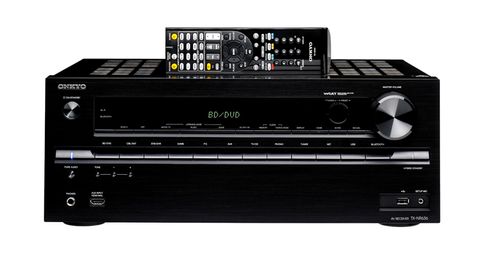 An impressively specified receiver, but its sound performance leaves us wanting

Onkyo has struggled of late to hit the sweet spot, in terms of performance, when it comes to this hugely competitive price level.

We’re intrigued, then, when we see Onkyo going all-out on the features again. Introducing Dolby’s Atmos into an AV receiver at this level is a big move, something competitors are saving for flagship models.

The feature hadn’t landed via a firmware update at the time of writing – we will test it when it does (in September, says Onkyo) – but it’s certainly an enterprising move.

The TX-NR636 is a 7.2-channel amp that supports 4K/60fps upscaling through five of its seven HDMI inputs.

One of these is front-mounted and MHL-compatible, for displaying 1080p content from tablets and smartphones with up to 7.1 channels of surround sound.

It’s also the only receiver confirmed to support HDCP 2.2, the latest HDMI encryption/decryption scheme projected to be used by 4K Blu-ray players (should they be forthcoming).

As for legacy connections, you get three composite video inputs and one out, one optical, two coax and six analogue audio inputs, plus a phono input for a turntable.

We’re disappointed that a front-mounted USB port still only supports playback from USB keys rather than an iPhone or iPod.

But as with last year, there is Bluetooth built-in for Spotify, Deezer, TuneIn Radio and Aupeo, plus it’s DLNA-certified for streaming high-res audio (including 5.6MHz DSD files) from connected network devices too.

Speaking of streaming, there’s a good selection of streaming services to go at - including Spotify, Deezer, TuneIn Radio and Aupeo. In addition, it’s DLNA certified for streaming high-res audio (including 5.6MHz DSD files) from connected network devices too.

For set-ups with a second zone, the TX-NR636 is able to output the same sound from the receiver to a second pair of speakers in another room, or alternatively control independent analogue-only audio instead.

If you’re looking to output a digital signal, you’ll have to look elsewhere, perhaps in the direction of the Sony STR-DN1050.

We’re disappointed when it comes to set-up – Onkyo has dropped the Audyssey calibration in favour of its proprietary AccuEQ instead, and we’re not convinced it’s a good move.

The system is easy to use, but we have issues with it not detecting our sub where all other systems did. It also registers our large speakers as small.

We’d recommend double-checking your results to be sure they are accurate.

Onkyo’s remote app has been updated to include compatibility for all releases between 2010-14.

It offers a clean, easy-to-navigate interface, giving you general remote control abilities – such as input selection, volume and EQ tweaking and zone playback control – plus easy streaming from online services and network-connected devices.

Browse a NAS drive via the app and you will find all the tracks you have for playback, while streaming services can be accessed from here too.

We play Fast & Furious 6 (the fight on a plane scene) to see how the Onkyo handles an action sequence.

We find a confident, detailed sound spreading seamlessly around the room with agility. There’s weight here too, though not as much as with the Yamaha RX-V677 or Sony STR-DN1050.

The Onkyo lacks the solidity its competitors offer too – it’s capable of going loud and sounding impressive, but with some fragility.

We often get the hard edges of the notes, but without enough substance to compensate.

Switch the test disc to Total Recall (2012), and while the TX-NR636 is capable of telling the difference between loud and soft and portraying it in a well-timed manner, it’s the finer dynamics that inject excitement and tension into a scene that we find are missing.

You will need to be careful with partnering kit. Musical performance proves a similar experience, and struggles to hold our interest.

There are few grumbles when it comes to balance or timing, but it’s just not an engaging experience due to a shortfall of dynamic expression and insight.

We spin Clean Bandit’s Rather Be – but it’s just not an engaging experience. We’ve seen quite an improvement in the stereo performance of AV receivers this year, but this Onkyo can’t quite compete.

There’s no denying the TX-NR636’s spec list is superb, but when there’s a price to be paid in performance then the balance is wrong.

We expected more from the TX-NR636, but it just doesn’t deliver.