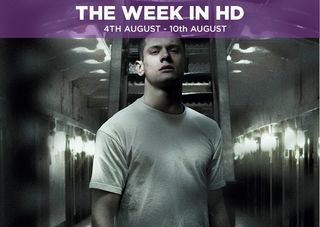 Enemy of spellchecker Richard Ayoade's follow-up to his 2010 hit Submarine is just as weird as his first feature, with a morbid sense of humour that we found rather hilarious.

It stars Jesse Eisenberg as a government clerk Simon James who's life takes a turn for the worse when he encounters his double James Simon (also Eisenberg).

The film may not be to everyone's taste, but The Double is another confident film from a director with a taste for both style and substance.

Searing prison drama Starred Up makes its way to high definition this week, and despite following the trend of British films being rather depressing, it's an absorbing film with much to recommend about it.

Not least the central performance from Jack O'Connell, who fully convinces as troubled and violent teenager Eric who's transferred to an adult prison where he meets his father Neville (Ben Mendelsohn).

It's unflinching in its portrayal of prison and arguably ends a little too conventionally. Despite that the performances are excellent across the board with Rupert Friend as a prison helper making an impression too.

Considered to be a possible player in the 2014 film awards season, Jason Reitman (Up in the Air, Juno, Thank you For Smoking) didn't live up to inflated expectations and petered out.

The film itself is something of an about turn from Reitman, ditching his more satirical/comedy eye for a film that's more sensual and dramatic than his previous work.

It doesn't always work, but the performances are the main reason to watch it.

A new Italian based series adapted from a series of book by Robert Naviano. If the title sounds familiar, it may be down to the film that came out in 2008 which shares much of the same DNA.

Like the film and the books before it, the TV series tells the story of a Neapolitan crime organisation that wages war against a rival. Expect a lot of blood and violence.

Episode 5. It feels like Utopia only just started last week but we're already on the penultimate episode of the second series.

Without giving away spoilers, this episode features revelation upon revelation as Leah and Wilson discover a terrifying secret.

Lost Cause. This latest episode sees the story split off into several threads, with Sookie arriving back in Bon Temps to find herself the unwilling host of a festive party, while Eric and Pam head to Dallas to attend a gala fundraiser.

Parallax. The premiere of series two kicks off with Bill (Michael Sheen) and Virginia (Lizzy Caplan) rekindling both their personal and professional relationship after the last series tumultuous end.

If you haven't watched the show, now might be a good time to give it a go.

Cake. It's back! The Great British Bake Off is here to tempt you with delicious food and this episode is all about cakes.

We'd eat beforehand just to stop us from cramming in any more food after watching it.

What else can you say about Raiders of the Lost Ark that hasn't been said before? It's a classic that still manages to seem fresh 30 years after its release.

Our favourite bit? The truck chase? The sword/pistol gunfight? There are too many to choose from.

The Bourne Identity gave the spy/action genre a jolt, but it was the sequel that served up the template for action films to come.

Rip-roaring action scenes aside, Supremacy ushered in the age of grown up action films that had the brains to go along with the brawn.

James Bond owes a debt of thanks.

Having infrequently popped up on BBC iPlayer, the first series of Orphan Black is now available on both Amazon and Netflix streaming platforms.

When orphaned hustler Sarah Manning (the very talented Tatiana Maslany) witnesses the suicide of a woman who looks identical to her, she's pulled into a conspiracy and… that's all we'll say for now.

You're much better off watching this show cold, and now you can binge watch the episodes or space them out (we'd recommend the later).

Cloudy with a Chance of Meatballs 2 - NOW TV

We mentioned Cloudy 2 when it appeared on Blu-ray earlier this year and now it's available on Sky's NOW TV platform.

It's not as funny or as inventive as the first film, but it's still a very fun watch with some delicious food-based puns.

The American version of Danish drama The Killing was cancelled after its third season. However, like Arrested Development before it, it's been rescued for a fourth season by Netflix.

It's another dark but interesting season, with the first episode seeing Detectives Sarah Linden (Mireille Enos) and Stephen Holder (Joel Kinnaman) investigating a brutal case that has links to a military academy.

The Mother Line. In what's been a thoroughly good series so far, Nessa (Maggie Gyllenhaal) discovers the full cost of her release from captivity.

Guess Who's Coming to Dinner? So, after dominating the ratings in the US over the last few years, political drama Scandal saunters across the pond to appear on UK screens for the first time.

This episode focuses on Olivia's (Kerry Washington) relationship with her father, which has suffered a dip after a falling out in previous years. A falling out that may have something to do with him working for a rather shady branch of CIA…

Arnie may never have been a particularly good actor, but when it came to his portrayal of a killer cyborg in the original Terminator, he was amazing.

Judgment Day sees him swap the 'killer robot' role for that of a protector who's sent back in time to prevent John Connor (Edward Furlong) from being assassinated.

A sequel that significantly betters the original.

If you're tired of sitting on the couch and wondering when football is coming back, worry no more - the French league kicks off on Friday night.

It's not the Premier League, but it's a bit of a placebo until the first weekend of the season starts next week.

With Star Wars gearing up for a new outing next year, it's amazing to think that the series is now 37 years old.

A New Hope is not the best of old trilogy (that belongs to The Empire Strikes Back), but it has a sense of fun that seems to be missing from a lot of current blockbusters.

Although the recent Guardians of the Galaxy managed to restore some balance in that respect.

Twilight's Last Gleaming. You may not have heard of this show and we wouldn't be surprised.

It follows a group of teenagers who have been sent back to a ravaged Earth to see if it's still habitable.

Twilight's Last Gleaming sees a plan to reduce the population exposed as the relationship between Clarke (Eliza Taylor) and Finn (Thomas McDonell) comes under threat.

It's still early days, but both teams will be wanting to put a marker down for the forthcoming season in this curtain raiser at Wembley.

Arsenal had an encouraging end to last season, winning their first trophy in nine years. Meanwhile Manchester City will want to prove they can retain the title, with their rivals strengthening during the summer.

Marc Marquez has won the first nine races of the season (the first time that's happened since 1970) to absolutely storm to the top of the driver's standings.

Who can stop him? When he's on this kind of form there are very few who can.