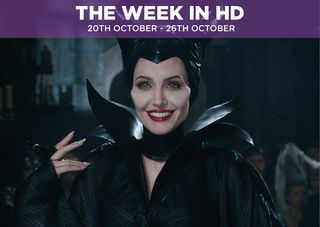 Disney continues to make movies about baddies that aren’t baddies. Maleficent, the evil witch in the Sleeping Beauty story, is revealed to be entirely justified and not actually that evil. It doesn’t stop Angelina Jolie from being a fair bit creepy, though. It’s the cheekbones.

Nick Cave intimidates his audience on and off stage in this pensive 'documentary' where he reveals his innermost thoughts to a therapist, Kylie Minogue and Ray Winstone. A truthful fiction, a dissembled biography, a study of good suits and bad beards, an examination of a Sussex seaside town as character and muse... 20000 Days on Earth is as wilful and half-hidden as the man himself.

A shaky start was followed by a strong finish to Marvel's new TV series Agents of S.H.I.E.L.D. Following a team of S.H.I.E.L.D operatives (headed by Clark Gregg's Phil Coulson) as they chase down superhuman threats to world security, it's filled with several guest appearances from characters featured in the MCU (Marvel Cinematic Universe), decent action (for a TV show) and a few twist and surprises towards the end.

And with the second series about to start, this release serves as a good introduction for the next phase of Marvel's impending world domination.

An inventive and often scary horror film, Oculus stars our very own Karen Gillan (Doctor Who) as a woman who tries to exonerate her brother of a murder by providing evidence that the crime was committed by a supernatural phenomenon. Easier said than done. You can read our review of Oculus here.

Selina Kyle. We have to admit, the first episode of this heavily-hyped TV show was a bit creaky, but we're hoping it can motor on from that unsteady start and find its feet. In this episode Gordon is on the trail of child abductors preying on homeless youths. And considering the name of the episode, we can't help but think we'll be given a proper introduction to a future cat burglar.

Strangers. The Walking Dead gang go on a trip. Hooray! However, in this world a trip is rarely filled with fun and more likely to be nerve-wracking excursion. This time Rick leads a team to go look for more supplies and is also faced with people within the group growing suspicious of each other.

Rick just can't grab a break, can he?

Devil You Know. Things don't get easier for Nucky in the latest episode of Boardwalk as his current problems see him turn to the bottle while Eli (Shea Wingham) and van Alden (Michael Shannon) are tasked with bringing down the biggest gangster of all - Al Capone.

Chelsea have enjoyed a great start to the season and they'll want to keep it going with the return of Champions League football. Even though it's only the group stages, Mourinho will not want his team to show any signs of complacency.

Are We Alone? Brian Cox (no, the other one) presents a TV show examining the role of humanity in the universe. This third episode (out of five) takes a look at the possibility of alien life and whether humanity will ever encounter it.

Guest. With the community of Mapleton still recovering from their collective grief, Nora (Carrie Coon, Gone Girl) attends a conference in New York where she finds out that someone else is impersonating her. Spooky.

With only one win in seven games, Arsenal fans won't be happy with their team's current run of form. With injuries decimating the squad (again) and the defence looking as likely to concede as their attack scores, Wenger and his men need a win to ease the pressure.

Live coverage of the urban music awards hosted by Sarah-Jane Crawford and Mel B. Nicole Scherzinger, Professor Green, Jessie J and Ella Eyre will be performing in person along with several other guests.

Fighter Flight. With a new Star Wars film arriving in 2015, this animated series will bridge the events of Revenge of the Sith and A New Hope. Flight sees Ezra and Heb (two new and young characters) steal a TIE fighter to rescue prisoners. Expect to hear the voices of Billy Dee Williams as Lando Calrissian and James Earl Jones as Darth Vader himself over the course of the season.

Tommy finds out what his secret mission from Campbell is. Will he go through with it?

Elsewhere, Arthur undertakes a violent takeover of the Eden Club in London, while Polly's son Michael is welcomes into the Shelby family business.

A Spielberg classic and one we never tire of seeing. We think you know the set-up but if you don't, it features an island, a T-Rex, velociraptors and an electric fence. And it's glorious.

Mr. Paris Shoes. Last week's episode introduced us to the staff of The Knickerbocker Hospital in New York, and Mr. Paris Shoes takes us further into their lives as Thackery (Clive Owen) operates on a man but has other problems to deal with.

You can also watch the first episode, for free, on YouTube.

Shadows. Agents of S.H.I.E.L.D is back. Phil Coulson is rebuilding the fallen agency after Hydra emerged towards the end of the first series. This time they're after artefacts that were taken from the S.H.I.E.L.D vaults and come across a new villain, Absorbing Man - a character who take on the consistency of any object he touches.

Lucy Lawless guest stars and so does Hayley Atwell, as the episode starts with a look back at the beginning of S.H.I.E.L.D.

Reminiscent of the recent Edge of Tomorrow, but with less action and a focus on suspense. Source Code was Duncan Jones' (son of perennial music artist David Bowie) second film after his Kubrick-inspired debut Moon.

With a dash of Hitchcock in a sci-fi twist, Jake Gyllenhaal plays a soldier who's been sent into another person's body to avert a train explosion, but he only has eight minutes each time to stop it. A clever premise is marred by a slightly unsatisfactory end, but the chemistry between Gyllenhaal and love-interest Michelle Monaghan more than makes up for it.

Wakey, wakey, rise and shine, it's an early kick-off as England take on Samoa in the first round of matches in the Four Nations. With home nation Australia stuttering, a good result here will give the England team the confidence they need to win the tournament.

West Ham have been in a terrific vein of form, occupying fourth sport in the league and playing good football. Much is expected of Man City and despite their sometimes less-than-solid defence, they'll want to guard against giving in-form strikers Diafra Sakho and Enner Valencia a sniff.

A tad too long (3 hours is a bit much), we still quite like Peter Jackson's remake of the original 1930s film. Where that version skimped on character, this one gives some weight and a bit more breathing space to Kong and the rest of the cast.

Andy Serkis's mo-capped Kong is almost as good as his Gollum, full of emotion and anger, while James Newton Howard's score really adds to the old-timey serial feel of the film.

In the Forest of the Night. Londoners wake up one morning to find that the trees have moved back in. It's a new, unusual, and rather beautiful kind of invasion, and it's taking over the entire world.

But as the Doctor, Clara, and a group of Coal Hill students find out, this seemingly idyllic change harbours a sinister threat. The forests have reclaimed their space in the world, but is it at the expense of humanity's survival?

Trylon and Perisphere. After the events of the last series' finale, Carrie is due some good news. Unfortunately, it doesn't look like she'll be finding it in Trylon and Perisphere which sees Claire Danes' CIA officer brought back to the US for an official enquiry while Quinn (Rupert Friend) spirals out of control.

Marc Marquez wrapped up the championship in the last round making it two out of two title wins. What's left? Another win in Malaysia will do nicely, cementing his position as the dominant driver of 2014, while other drivers will be looking for reasons for to be positive against this unstoppable juggernaut of a racer.

The match where Chelsea slip up? The form book would suggest no, but with a rocky start to the season behind them (just about), van Gaal will want his team to put in a good performance against one of the would-be challengers for this season's Premier League.

A cult film with eclectic visuals, Speed Racer is a marmite film, you'll either love it or find it oh so very tiring. It's about Emile Hirsch's Speed Racer (that really is his name) driving a car crazy-fast, as he participates in a series of motor racing events to become the best driver there is.

It's bright, colourful and we doubt you have seen anything quite like it.