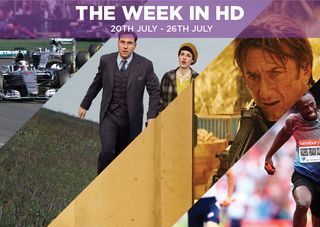 Sean Penn in an action film? It's not the most likely of situations perhaps, but The Gunman sees Penn play a mercenary called Terrier, who gets into trouble when a death he's involved in sparks uproar and chaos in the Congo. Emerging several years later, he finds himself the target of a hit squad, which sets him on a course to try and find out who wants him dead.

The cast is surprisingly good (Idris Elba, Mark Rylance, Javier Bardem, Ray Winstone) in a film that's been touted as a more realistic action film. Penn acquits himself well as a soldier of fortune, but the film's lofty ideals and themes make for a sobering action film that's perhaps a little too serious for its own good.

Polyglots v Yorkers. A team of linguists go up against three students from the University of York as they try to make astute connections between seemingly random facts.

Beware the music round.

Other Lives. An episode that takes place 66 days after the shootout in Down Will Come, and life isn't going particularly well for anyone in Vinci (does it ever?)

Ray and Frank are considering new life choices while Ani, after been demoted to working in the evidence locker, heads up the coast with Paul to follow a lead.

Stunning, critically acclaimed drama series following a group of young men from paratrooper training in 1942 through to the end of the Second World War. An all-star cast of actors who had mostly yet to become famous back in 2001 peppers the screen - from James McAvoy, Michael Fassbender, Tom Hardy and Marc Warren to Damien Lewis, David Schwimmer, Simon Pegg and more.

The 10-part mini-series continues throughout the week on Sky Atlantic HD. Don't miss it.

Martin Scorsese won an Oscar for The Departed, but he's made better films than this Boston-set crime effort.

A remake of Chinese film Infernal Affairs, The Departed features Leonardo DiCaprio as a former policeman who goes undercover to work for Jack Nicholson's violent crime boss Frank Costello. Costello has a mole working for him in the Boston police department - who happens to be Matt Damon's Colin Sullivan - and both are trying to locate the identity of the other.

It's a twisty, often violent film featuring great performances even in the supporting roles (Alec Baldwin and Mark Wahlberg trying their best to steal the show). It's not up to the standard of his eighties/early nineties oeuvre, but it's still better than many crime films. The ending is a downer, though.

A modern-day musical, written by John Carney, that went on to become a hit Broadway show and winner of an Oscar for Best Song.

The film follows a busker and a Czech flower seller (Glen Hansard and Marketa Irglova respectively, who composed and performed all the songs in the film) as they meet in Dublin, play songs together and fall in love.

Xiomara and Rogelio are forced to reveal how they feel about each other, but are they prepared to say what's really on their minds?

Digestivo. Well, it seems like Hannibal has finally been caught. But not by the bumbling FBI.

Mason Verger is poised to exact his revenge, but Alana and Margot may just save the day in the nick of time.

East Wing. Selina and her staff are preparing to meet with the the Israeli prime minister - it may just be the most important meeting of their careers.

As the plans go ahead, Amy finds out about a change of staff that comes as a shock, while Mike tries out a new look for his new job.

It's the one before the Final! Celebrity MasterChef is winding down, but the four finalists have two daunting challenges to get through before they reach the end.

First up is John Torode's palate test. He cooks a dish, they taste it, and then attempt to recreate it in one hour and 15 minutes.

The next challenge is even scarier: cooking two dishes for four of the country's most feared restaurant critics (who are also MasterChef regulars, we're guessing). Only three chefs can progress to tomorrow's grand final.

Cycle. M Night Shyamalan's Twin Peaks-esque drama comes to the end of its first. Ethan and the rest of the town go up against the Abbies (human mutations) as the future of humanity is at stake.

The Olympic Stadium is host to the 11th round of the Diamond League series, which neatly serves as the third anniversary of the London Olympics.

Expect major British talent to make an appearance, including Mo Farah (who's been in the tabloids for all the wrong reasons lately). Perhaps the British crowd can give him a lift.

It's the grand final, and one celebrity/amateur chef will get the distinction of being crowned the 2015 Celebrity MasterChef Champion by the end of the episode.

After six weeks, 20 contestants, and countless dishes, the final three face their biggest challenge: the Chef's Table. Hosted by Michelin-starred chef Angela Hartnett at Murano, the three finalists must work their hardest to serve Michelin-standard food to impress a table of the country's leading female chefs.

Then it's one last session in the MasterChef kitchens, where an exceptional three-course meal is all that stands between them and that shiny trophy.

The Hungarian Grand Prix - Qualifying. The 2015 Championship continues its European leg, but it's a sombre return after the sad news of Jules Bianchi's death.

Tomorrow's proceedings will feature a minute's silence before the race.

How can you have a Transporter series without Jason Statham? It shouldn't be possible.

But the TV series exists, sans The Stath. Chris Vance takes on the role of Frank Martin - an ex-special forces agent who now works as a driver for hire, shuttling goods or people for a lot of money.

In tonight's episode, a Berlin job ferrying a young socialite turns into a protection stint.

The third sequel of the so-bad-it's-sort-of-good budget horror film series has taken its shark-infested tornado epidemic from Washington D.C. to Florida.

The title reflects our sentiments exactly.

The Hungarian Grand Prix. The Hungaroring is set for the latest instalment in the F1 Championship, with a few of the season's stories still bubbling over.

Rosberg's still hanging on to Hamilton's coat tails, and a win here could set up an interesting race at Spa next month. Elsewhere, McLaren needs to get a move on – unlikely if the Honda power unit keeps acting up, while the midfield is set to be a closer battle with a number of teams bringing updates to their cars.

Time and Tide. Peggy closes in on Stark's stolen technology, but her secret mission may be exposed as the SSR agents arrest Jarvis.

Not only is her double agent persona in danger, but it seems that Jarvis and Howard Stark have been keeping secrets from her, too.

Based on Agatha Christie's short story collection Partners in Crime (which doesn't feature the iconic Poirot or Miss Marple), this six-part adaptation is about the husband and wife detective team of Tommy and Tuppence Beresford (played by David Walliams and Jessica Raine) as they're accidentally propelled into the world of espionage during 1950s Cold War Britain.