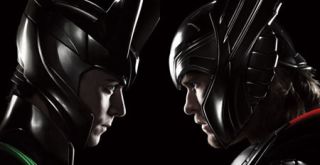 Welcome to another week of HD and 3D films, TV shows, sports and Blu-ray releases.

We hope you survived the snow this weekend, whether you were out building snowmen or getting stuck in trains/cars/buses/insert choice of transport. As the country stubbornly insists on being freezing cold, here's a couple of highlights from the week ahead that'll keep you entertained in the cosy interior of your home.

More than 10 years since its release, and this Ridley Scott and Russell Crowe historical epic is still, well, epic. Tigers and gladiators and Roman politics - what's not to like?

If all that blood and violence isn't your cup of tea, there's alway this: the cult satirical rockumentary following the (fictional) ageing British heavy metal band Spinal Tap on their comeback trail as they promote their new album. Volume to 11, please – and enjoy.

Leading up to the epic The Avengers film coming out this Spring, Thor is the fun-filled, hyperactive, goofy-yet-prone-to-destruction youngest brother compared to Iron Man and Captain America. While Chris Hemsworth looms about searching for hammer and horse, Tom Hiddleston's Loki goes over to the Dark Side. All together now – 'You forgot your thaddle, thilly'...

Life from Light – How planets first harnessed light from the sun and created our life-giving atmosphere. Expect spectacular images of spacey-wacey stuff.

Autobots v Decepticons. ON THE MOON. More special effects and explosions than Michael Bay could ever have dreamed of. Oh wait, he directed this. More excitingly, Leonard Nimoy joins the cast as the voice for Sentinel Prime.

While away the Sherlock blues (and the prospect of another 18 months wait for season 3) by diving into the loveable and excellent Granada series, with Jeremy Brett as the consulting detective. A foreign office clerk's career looks to be in jeopardy when a secret document in his charge is stolen.

The ultimate version of Ridley Scott's visionary sci-fi classic, where Harrison Ford stars as a bounty hunter in the year 2019, who must hunt down dangerous Replicants.

Supernatural film by Guillermo del Toro based on the Dark Horse comics. Ron Perlman is transformed into the red horned demon, raised in an FBI lab, who becomes a defender against evil forces. Doug Jones (the creepy pale man with eyeballs in his hands from Pan's Labyrinth) is awesome as Abe Sapien, his voice provided (uncredited) by David Hyde Pierce, aka Niles Crane.

While zebras, primate and tigers in Woburn Safari Park are taken ill, the elephants are having a grand time trying out a new trick at feeding time.

I wasn't really expecting much when I started watch Suits, but I was instantly hooked onto this legal drama from the US. Classy and funny, with clever scripts and great comedic timing from all actors, the shows manages to make corporate law glam and exciting as if it was a heist series, like BBC's Hustle. if you're doing nothing this evening, settle in for a Suits marathon.

The Wedding of Sarah Jane Smith, Part 2 - The Doctor joins the battle, but is he too late to save both Sarah Jane and the Earth? Knowing the Doctor, he's got a plan up his sleeve. With 10th Doctor David Tennant and the late great Elisabeth Sladen.

Okay, here's the thing: I didn't really like Avatar. Sorry, James Cameron. But what I did love – and what looked amazing in 3D – were the forest scenes on Pandora, and the flying Ikrans.

Clarkson and Hammond take over filming stunts for the climactic car chase of the forthcoming Sweeney movie. At risk of sounding like a broken record, what could possibly go wrong? Actually, this sounds rather fun.

Still reeling from George's death last episode, we get a glimpse of the Old Ones, while three visitors hope that baby Eve is the Saviour and can perform a miracle.