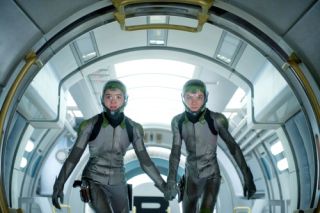 Hello and welcome to The Week in HD, our guide to all the must-see high-definition TV shows, films, sports and Blu-ray releases to grace your screens over the next seven days.

Also, check out our new Twitter account @WHFplaylist – home of our magazine's Playlist section. We'll be bringing you the latest news and reviews of our favourite movies, music, TV shows and games, as well as some tasty competitions that you can enter and win some shiny prizes.

(If you already follow us on @TodayinHD, not to worry – we've just changed the name!)

Dogged on its release by the reputation of its author, the controversy managed to overshadow Ender's Game which, despite the marketing isn't quite what you might think.

This sci-fi film follows Ender (Asa Butterfield) as he's recruited for a military space program that trains kids to fight against an alien race.

We can confidently say this is the best film we've seen out of this week's Blu-ray releases (OK, we admit its the only one we've seen this week, for shame). Short Term 12 is a great, small-scale film about the life of kids in a residential treatment facility (a bit like rehab for kids).

Brie Larson gives a great, naturalistic performance as one of the supervisors who's suffered some troubles in her own past. Highly recommended.

Despite its setting in the Phillipines, Metro Manilla was up for Best British Film at the BAFTAs. Judging by reviews it was well-received, telling the story of an impoverished family who flee their rural home for Manilla, only to find themselves mired in the murky morality of the big city.

Touted as a possible Oscar front-runner thanks to its lofty premise and the scattering of awards it won last autumn, in truth the film couldn't quite live up to expectations.

Following Forrest Whitaker's Cecil Gaines as he serves several Presidents in the White House, it's an embellished take on a true story that encompasses the civil rights movement, Vietnam and American society.

An ambitious film from director Lee Daniels (Precious, The Paperboy) that falls down due to an uneven narrative.

Also out on Blu-ray this week: French film Querelle and English horror In Fear

Can Arsenal overturn a 2 goal deficit? It's certainly not out of the realms of possibility but you suspect that unlike last year, Bayern will not be too accomodating when they take the field at the Allianz Arena.

While Arsenal won 4-1 in the FA Cup over the weekend, Bayern went a goal down against fifth-placed Wolfsburg and proceeded to put six goals past them. Yikes.

Scottish Fight Club? While the title of this documentary would suggest a bunch of barbarians smashing each other with chairs in some some poorly-lit alley, the pic above suggests something a bit more organised and – whisper it – not too far from WWE.

We're hoping to see some Figure 4 leg locks and swan dives off the top buckle, please.

Cartoon Wars Part 2. With the new South Park game (Stick of Destiny) now out, perhaps now would be a good time to rekindle any interest in the TV series?

From what we remember this episode from the tenth season had us in hysterics, with Cartman's attempts to get Family Guy cancelled annoying Kyle. If you haven't seen it, the skit on how the Family Guy writers come up with their ideas, as imagined by South Park's creators, is worth looking out for.

Paris Saint Germain effectively have both feet in the quarter-finals following their rout of Bayer Leverkusen in the first leg.

With Edison Cavani, Lucas Moura, Ezequiel Lavezzi and of course the mercurial Imbrahimovic on form, we're expecting more of the same.

Part of Channel 4's space season, Living in Space will follow the story of three astronauts (Rick Mastracchio, Koichi Wakata, and Mike Hopkins) as they talk about what it's like to live in space and the dangers they face.

For anyone who's a fan of astronomy it's a must-watch glimpse of live beyond the Earth's atmosphere.

Channel 4's Space season concludes on Sunday with a live broadcast from Mission Control in Houston.

Jesse: Week Two. In the lists of great TV shows of recent years, we think many will overlook HBO's In Treatment. Despite being on the perfect channel for its tastes it never really hit the mainstream with its unique structure and emphasis on dialogue (lots of it).

Jesse: Week Two sees Dane DeHaan (the upcoming Amazing Spider-Man) confront his own reluctance with to get in contact with his birth mother with Gabriel Bryne's psychiatrist.

Football, football, football. If you like it you won't be able to avoid it as the Europa League kicks off. Tottenham will be hoping to go further than last year but they're up against stiff competition in the form of last year's finalists.

Sal's Pizza. TV comedy's MVP? While Moden Family and Parks and Recreation have ruled the comedy heap since The Office and 30 Rock finished, Brooklyn Nine-Nine could be the next comedy to challenge them.

Last episode of the mystery drama series as Creek tries to figure out how a wealthy woman who's been kidnapped manages to pull off the tricky feat of teleportation to alert the police of her whereabouts.

The Magical Place. After a shaky, stale, family friendly start, Agents of seems to be finding its groove with a succession of fairly dark (well, as dark as family shows can get) episodes.

After its mid-season break, this episode has the team on the lookout for Coulson after his abduction by Centipede. Some surprises, a few answers and an ending that's a tad creepy, make for a decent epsiode.

With Formula One gearing up for another eight months of grand prix action, Sky will be trumpeting their (massive and quite expensive) horn.

All 19 races are live on their F1 channel and they're aiming to offer an unrivalled amount of analysis ahead of a season that promises to be full of surprises.

Up at 5am? Of course not, unless you're an F1 fanatic who wants to see everything live and is desperately hoping for some sort of re-order of last year's elite drivers.

Such is the unpredictability of these new cars, the established order may well be challenged and this qualifying session would be a good place to find out if anything has changed... or not.

Bradley Cooper becomes limitless in this thriller about an everyday schlub who takes a pill, becomes very smart and runs afoul of some not very likable people.

Made when Cooper was emerging from the shadow of being 'that guy', Limitless is a more than decent film with Robert De Niro turning in one of his 'when i can be bothered' performances'. Well worth a watch.

Comrades. The second season premiere of the very, very good TV series about a couple who are Russian sleeper agents in Reagan-era America.

Comrades picks up a few weeks after the ending of the first, as Elizabeth (Keri Russell) and Philip (Matthew Rhys) find their famliy life put at risk when a routine mission goes awry. It's a good 'un, this one.

While part one of the Burma special is actually showing on Monday, we're going to highlight the repeat on BBC Three HD as the channel will no longer be broadcasting (if budget cuts go ahead) in its current form.

This Burma special sees the lads trek through the country (in what we suspect will be rather shoddy lorries), on a mission to build a bridge over the River Kwai.

Another early wake-up call for F1 fans as the season proper starts in Melbourne. We don't doubt that much of the conversation will be dominated by the woes of certain teams, but the new regulations should effect some more competitive racing than in recent years.

One thing we think we can count on is that everyone will start the race. Whether they'll finish it is another matter.

The Golden Army manages to best the original, continuing Del Toro's habit of mixing warm characters with creepy situations and, as the main player, Ron Perlman's Hellboy is just a great piece of casting.

Hailed as a British first, Channel 4 will be broadcasting live from the Internation Space Station as it hurtles across the sky. Dermot O' Leary will br presenting live from Mission Control in Houston.

Final epsiode of another Top Gear season as Jeremy, Richard and James pass through the volatile Shan state on their way to completing their final challenging – building a bridge across the River Kwai.