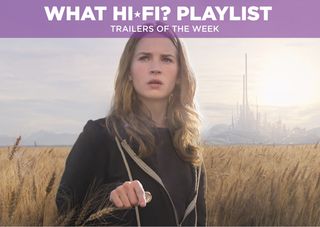 We're less than a month away from Marvel/Netflix's Daredevil and this trailer sets the world a little bit more than the first one. In terms of quality, superhero shows have been tricky to call but we have high hopes that this could be a good one.

Tomorrowland's teaser didn't reveal much (a touch we rather like) but this trailer offers a few more hints as to what audiences can expect later this summer. And we must say the villains look a little creepy.

Tomorrowland will be in UK theatres 22nd May, 2015

Dwayne Johnson versus an earthquake. We could be wrong here, but surely The Rock beats a seismic event, right? We're hoping this is a step up above recent disaster flicks.

People haven't quite warmed up to Pixar's latest although perhaps this trailer could change a few minds. If anything, it has a stellar cast and after Monsters University this could be Pixar back on song with an original film, something we haven't seen for a few years.

Dragons. Tyrion with a beard. War. Lots of fighting.

With the TV show diverging from the books all bets are off on the fates of many characters. At the top of our list is Jon Snow. Will he survive the season?