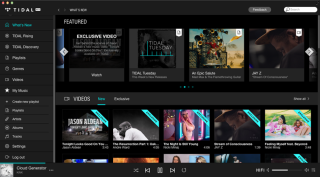 For those people who prefer to keep their streaming music on their desktop and not tied to a web browser, a desktop app is the answer. And now Tidal has a shiny new one.

The look, feel and overall interface is nigh-on identical to the web version of Tidal, which is no bad thing in our book. The update also introduces gapless playback, previously missing on Tidal.

In the US, Tidal will also join with TicketMaster to give subscribers early and exclusive access to concert and music festival tickets, plus cheaper subscription plans for students: $4.99 for standard and $9.99 for the lossless Hi-Fi service.

The desktop app will also "support different audio sources, like Mac AirPlay and DACs" so you can stream music to wireless music systems.

An update to the Tidal mobile apps is also set to roll out with improved search, updated menus, a prominent "offline mode" button and new personalisation options.

The Tidal desktop app allows access to the service's top-tier, CD-quality, Tidal Hi-Fi subscription, as well as giving you the option to select lower-quality audio should bandwidth be an issue.

The first screen on the app shows you "What's New", with featured content, videos, playlists, albums and tracks on offer.

You can also quickly browse by Playlists, Genres and Videos, or access your own My Music tab of saved music. There are direct access tabs for access to your own library of tunes by playlist, artist, album and track.

There's the ability to connect to your Facebook and Last.fm accounts, plus the option to set Tidal's desktop app to open automatically when you fire-up your computer.

There's no sign of offline playback on the desktop app however.

What is new is gapless playback, which until now was missing from Tidal. We tested a few albums and tracks and, hey presto, no gaps.

The new desktop app, which launches in beta, is set to be available to download from 10am tomorrow [Thursday 4th June].