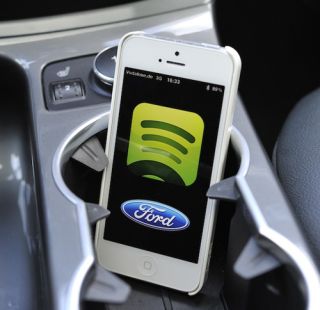 Ford is integrating Spotify in to its Ford SYNC AppLink system, bringing a voice control Spotify experience to a UK car for the first time.

Announced at MWC in Barcelona at the Ford press conference, the move will bring full access to your Spotify library... in a safe and controlled manner of course.

In-car audio has always been a little slow on the uptake, whether that's been with DAB radio or iPod connectivity, but the Ford SYNC AppLink system sounds much more like it. Shame it's only on one UK car for now.

Ford SYNC is essentially an in-car, voice-controlled 'infotainment' system, that works with an app that's available on compatible Android, BlackBerry and iOS phones.

Available in the US on over 1 million Ford cars, it launches on the new EcoSport SUV, a compact SUV car that is jam-packed with Ford's latest in-car technology.

The app gives your car's in-car music system access to various music and internet radio apps, such as TuneIn Radio and Amazon MP3 Player (in the US at least), which can then be voice-controlled.

Other car manufacturers have attempted to build Spotify in to their in-car systems but this is the first time Spotify has officially participated, announcing the deal in a post on the company's blog.

For more details on the Ford EcoSport SUV, check out the write-up on our sister site, WhatCar?.