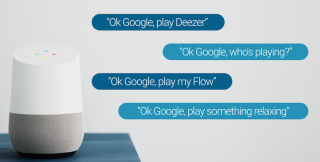 It used to be only Spotify and Google Play Music (naturally) that would work with the Google Home smart speaker. But now, Deezer is getting in on the action - provided you've signed up for Deezer Premium.

So what can you do with Deezer now? Well, there are playback options for choosing bands, songs (there are more than 43 million tracks available), or moods such as 'Summer' and 'Moments' - along with traditional genres.

You can also ask the Home to play your 'Flow', a personalised stream of music based on algorithmic recommendations. Other people with Deezer accounts can also play their own individual Flow playlists.

For those with an Amazon Echo, you're out of luck at the moment - Deezer hasn't confirmed anything so far. But hopefully support for other AI speakers (like the Apple Homepod or Microsoft's Invoke) will come soon.

Atari launches a hat that's also a speaker - it's Speakerhat!