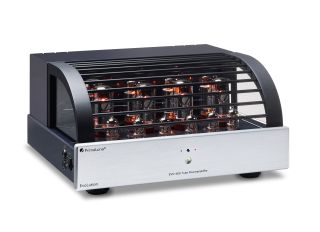 Dutch firm PrimaLuna has spent 16 years working on its mission: to deliver high-performance, valve-based audio components at affordable prices. (Affordable is of course a relative term – we'll let you decide whether upwards of £2000 for a preamplifier still sits in said bracket.)

But time marches on, and, thanks to company-founder Herman van den Dungen, the existing product range has now been entirely updated and replaced by a new, 13-model EvoLution Series.

Each of the four levels comprises an integrated amp, a preamp and a power amp, all – according to PrimaLuna – building on the design of outgoing models but with enhancements including new transformers and greater output power, upgrades to key circuit components and improved internal wiring.

New features have been added to some models, including dedicated headphone amplification and – in the case of the EVO 300 and 400 power amps and EVO 400 preamp – balanced XLR connections. A separate phono stage, isolated in its own enclosure, attaches underneath the integrated and preamp models as an option for users running a turntable.

The thirteenth component in the series is a DAC called the EVO 100 Tube Digital AnaLogue Converter. PrimaLuna claims it features the world’s first valve-based data clocking device. This promises a sound from digital sources that will match the natural fluidity of the best, fully analogue audio systems.

The models are all available with a black or silver front panel. Integrated and power amps come with PrimaLuna's EL34 valves as standard, but these can be swapped with KT88, KT120 or KT150 valves if preferred, thanks to PrimaLuna’s Adaptive AutoBias circuit. (EVO 100 models are not compatible with KT150 valves.)

Still with us? Good. As the range is 13-strong, we thought it best to list them, together with their UK RRPs and links for further information. All are available in the UK from September 2019, from sole UK distributor Absolute Sounds.