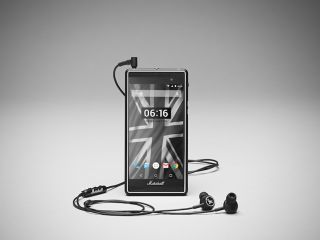 The London is a Lollipop-running Android handset built into a Marshall-designed body. The handset also features customised music applications to give the device more of an audio twist.

According to Marshall, the London uses a Wolfson "Audio Hub" to do all the number crunching. It crunches all the way up to 24-bit/192kHz as well as playing standard MP3 and AAC files among others.

The phone features a 4.7in, 720p touchscreen made with Gorilla Glass 3, complete with an anti-fingerprint coating. The built-in camera weighs in at 8MP.

On-board storage seems a little mean at just 16GB, but it can be boosted by a microSD card.

Marshall claims the removable 2500 mAh battery should give around seven hours of video and 55 hours of music playback from a single charge.

The phone's physical features have also been geared towards music lovers with the inclusion of dual 3.5mm inputs (with independent volume controls) so you can enjoy music together but listen at different levels. You change volume via a scroll wheel on the edge of the handset, which Marshall claims offers "tactile precision".

A dedicated button on the top edge of the handset takes you straight to your music and allows you to control it on top of whatever app you happen to have open.

While most smartphones have just one speaker, the London has two, both of which fire out and towards the listener.

The London comes with a pair of Marshall's own Mode in-ear headphones included as part of the package.

The phone costs £400 and is available to pre-order now for delivery in late August/early September. You'll also be able to buy it direct from Marshall's website.