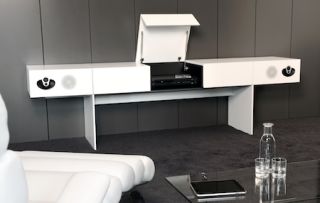 Blimey, it's beginning to feel like I'm turning into whathifi.com's interior design correspondent!

Yesterday it was IKEA's furniture/TV combinations, today it's Linn showing at the prestigious Milan Furniture Fair, with a sleek 'audio sideboard'.

Designed by Werner Aisslinger for furniture company interlübke, the system carries the 'says it all' name musikbox, and contains Linn streaming music hardware, amplification and speakers – complete with the company's 2K driver array, designed to create the effect of 'point-source' audio.

The unit is between 2m and 2.5m wide, depending on configuration, and can be driven from a wide variety of control devices. You can use Linn's own Kinsky software, available for PCs, Macs and iOS devices such as the iPad or iPhone, or a variety of third-party apps giving a further range of compatibility extending to Android phones and tablets, Linux devices and Nokia phones.

In addition to its inbuilt streaming, the Musikbox can also accommodate extra source components in its three central compartments, and is designed to be available in a range of finishes to suit all kinds of décor.

Designer Aisslinger says the idea 'came about on a whim in our Berlin Loftcube' – the company's 'modular living' concept, above – 'with the idea of combining relaxed living with cool music enjoyment. We wanted to create something completely new from the elements furniture, high-end sound experience and interior design.'

It took two years to get the unit into production, principally due to the problems of building the speakers into the unit, and finding the right dimensions to give an elegant design and a good sound: as Linn's Thomas Saheica puts it, 'With a width of 2.00 m / 2.50 m and the corresponding positioning of the speakers we have a proportion which transforms rooms soundwise into sound studios'.

And Linn's not the only music-related name creating a stir in Milan: performer, producer and now style guru Lenny Kravitz, via his Kravitz Design company, is putting his name to a range of chairs, based on the famous Philippe Starck Mademoiselle design, and covered in snakeskin, leather and fur, for italian furniture company Kartell.

Kravitz Design has been running for ten years, and the new collection is called 'Kartell goes Rock'.

And if that wasn't enough, Milan is also seeing the début of a Kravitz-designed range of ceramic tiles for Italian company Lea Ceramiche.

Apparently inspired by water drops and waves, the black and white tiles are called Goccia - Italian for 'drop'.

In an interview, Kravitz said the idea was to create an undulating impression along a wall: 'They're really fluid,' he says.

Make your own mind up about that one...