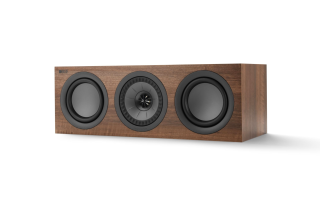 We're big fans of KEF's Award-winning Q Series here. Typically comprising three floorstanders, two standmounters and a centre speaker, we've awarded five stars to the Q350s as both a stereo pair and as part of a 5.1 surround sound package.

As of today, there's a new speaker in the range - the Q250c centre. A smaller, more compact alternative to the original Q650c centre speaker that comes as part of the Q350 AV 5.1 system we previously reviewed, KEF says it means increased versatility and offers new placement options.

Available in three finishes (black, white and walnut), the Q250c definitely looks the part and is complete with KEF’s innovative Uni-Q driver. With the removal of the rear port, it's now a sealed enclosure, too, making placement less fussy – being close to a wall is no problem, apparently, nor is positioning in a cabinet or AV rack.

KEF also says the Q250c can be used vertically as both a left and right channel speaker, offering a discrete, space-saving alternative to the Q350c.

It's not just a smaller version of the Q650c, either – KEF's updates for the Q250c include a Uni-Q enhancement: a new damped tweeter loading tube. There's also a new low-distortion inductor on the crossover, plus improvements to the bass drivers that apparently result in a cleaner, punchier bass performance, even at high volumes.

11 of the best KEF products of all time