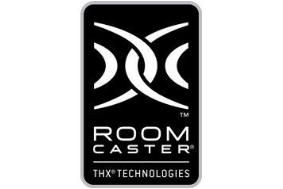 Roomcaster is designed to rid your system of all audio cables – not just speaker wire – by creating a network of Roomcaster-capable kit, with each device able to transmit and receive.

The system doesn't compress the sound – in fact, its up-to-50Mbps bandwidth is capable of handling up to 192k/24 bit audio, and 7.1 soundtracks – and will stream it without interruption.

"If you hear nothing [but your movies and music], everything is fine – you don't have to be technical to hear a dropout in signal," says Laurie Fincham, THX Chief Scientist and VP of R&D.

"Wireless shouldn't be a compromise – it should offer you at least the same quality as a cable," he adds.

Wireless audio - from receivers to headphones
Roomcaster is being made available to manufacturers of a wide range of home entertainment products - from AV receivers and speaker systems to iPod docks, games consoles and headphones.

THX expects the first Roomcaster products to be announced late this year, with more launches at next year's CES and a range of gear due in the UK by summer 2010.

We heard a demo of a prototype Roomcaster sub/sat speaker package in action, wirelessly receiving HD audio from the Iron Man Blu-ray via a Denon receiver.

Full surround steering and subwoofer reinforcement were present and correct – and with THX having such strong industry ties (with electronics and speaker manufacturers) we think Roomcaster has real potential.

On the subject of video, THX confirmed it's working on a version of its THX Optimizer that will appear on Blu-ray discs from later this year. An updated version of the display optimiser – with new patterns to help you set up your TV – will also be available on DVDs.

We'll bring you more news on Roomcaster and the HD Optimizer as soon as they are announced.