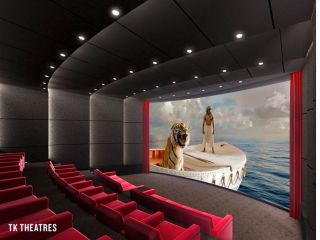 Having claimed to deliver the "ultimate movie experience" for over 20 years, IMAX today drew back the curtain on its new Private Theatre system, a custom-built home cinema install solution designed to bring the immersive IMAX experience to a domestic setting – at a cost, of course.

While the talking point of IMAX is often its huge, panoramic screen, Larry O’Reilly, head of worldwide sales at IMAX, says their research shows "sound provides more than 50% of the IMAX experience".

Accordingly the system has handmade speakers - aligned by lasers for precise imaging - which IMAX says are capable of "a dynamic range ten times greater" than those found in a typical theatre.

That sky-high cost isn't just about the kit of course, it also covers the bespoke design, installation and tuning of the system by IMAX’s theatre design team, and training on how to operate it.

As part of its inclusive five-year maintenance service, the system’s performance is monitored in real-time around the clock by IMAX's service centre - "24/7/365" - so that any issues or necessary tweaks can be addressed remotely. IMAX promises a five-minute response time. Impressive, as you'd expect for two million quid.

O'Reilly says that the IMAX Private Theatre should be seen as a multimedia entertainment solution.

The system comes pre-loaded with 200 movies (including the biggest IMAX movie releases in the past seven years), and up to four inputs - playing 2D or 3D content - can play simultaneously in a split screen or "multi-screen" mode. Each quadrant of the screen is then individually controllable through the system's tablet controller.

The IMAX system also has specific image-enhancing software built-in to improve the sharpness and colour richness of any content you play through it, whether it’s a high-definition Blu-ray or a standard-definition live broadcast. It better be a decent upscaler...

Apart from being able to cough up the cash, you'll also need a room that can accommodate a 10ft-tall (minimum) screen - plus space behind that for a booth to house the projectors.

While the IMAX Private Theatre can be designed on a much larger scale, the prototype 15-seater model requires a footprint of 12 x 22.5 x 41 feet (HWD).

The IMAX Private Theatre was launched in the US last summer and is now available in the UK and Europe.

Although there are no signs of a more affordable (and no doubt slightly more compromised) version coming to Europe any time soon, there are plans to launch such a solution in China later this year, so watch this space.

In the meantime, you can start enquiring about your multi-million pound home cinema by visiting the IMAX Private Theatre website. Eat your heart out, Dolby Atmos...