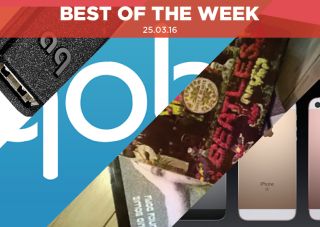 This week Apple announced a new iPhone and another iteration of its iPad Pro. Sainsbury's emerged as the biggest seller of vinyl records on the high street and Sky confirmed that it will begin 4K coverage of F1 in 2017.

Apple has confirmed the iPhone SE, along with a newer, smaller iPad Pro, at an event held in California earlier this week.

Rumoured for some time, the SE replaces the iPhone 5 in Apple's smartphone lineup. It comes with a 4-inch screen, but the same 64-bit A9 chip that's in the 6S and 16GB and 64GB storage options.

The base price for the 16GB model is £359, making it the cheapest iPhone yet.

Also announced was the 9.7-inch iPad Pro, which comes in 32GB, 128GB and 256GB configurations, with a number of improvements made to the screen and speakers.

The biggest vinyl retailer on the high street is now Sainsbury's

The resurgence of vinyl continues with Record Store Day just round the corner. Many will have been surprised though to hear which retailer is currently topping of charts for having the most vinyl outlets.

That retailer is Sainsbury's, with the supermarket giant having added 18 (and only 18) vinyl releases to 171 of its stores.

The selection is a mix of popular artists (including Adele and Fleetwood Mac), with records selling at between £12 and £20.

READ MORE: The biggest vinyl retailer on the high street is now Sainsbury's

Sky has rolled out its Sky Q TV service and it's already looking to add more 4K content to its roster.

4K content will be coming this summer, with Premier League footall likely to be there at launch. F1 will join it at the start of its next season in 2017.

Every race will be shown live and in 4K as the British broadcaster looks to assert itself as the leader in 4K broadcasting.

HTC's next flagship phone to be revealed 12th April

Watch how a vinyl record is made (in 60 seconds)

French music service Qobuz almost bit the dust in 2015. Now that it's back, just how well does it measure up?

Very well is the answer. We tested the steaming part of the service and gave it four stars, but the download section, named Sublime is a separate and excellent part of Qobuz.com. It offers a huge - if at times somewhat French focused - catalogue, extensive file support and a clean interface that's easy to use.

Though it sounds like a dance from the 1950s, the JitterBug has other things on its mind - namely improving your audio.

This affordable device filters any noise or interference from your computer before the signal enters the DAC. And it works excellently. Drums hit with more purpose and guitars twang with more intensity. Tracks are clearer with more detail to pick up on.

Taking the JitterBug out of the equation leaves music feeling that bit duller in comparison. A highly recommended solution if you listen to music through a computer.

We've seen many an impressive Rega turntable at What Hi-Fi?, and the Planar 3 is one of its best yet.

While it bears resemblance to its predecessor, plenty of changes have been made and all for the better. The Planar 3 delivers a class-leading combination of sound, build and ease of use.

For the performance on offer, there isn't another that can match it at this price.