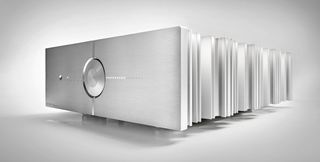 The Maestro has been given refined circuitry, with military-standard resistors, custom-made polypropylene audio-grade capacitors, and pure copper output connectors. It also has copper tracks at double the standard thickness, to improve power delivery.

Audio Analogue has paid particular attention to removing any global feedback - which can makes the amp sound tighter and less dynamic - with the aim of improving "authenticity and musicality".

The Maestro Anniversary's left and right channels have their own dedicated 600W mains transformers and separate grounds, which enables the amp to deliver more power and drive larger loudspeakers. Audio Analogue claims the new Maestro will deliver 150W into 8ohms, rising to a mighty 500W into 2ohms.

The preamplifier section is, like the power amp, 'dual-mono', and each of the three key elements to the unit - power supply, preamplifier and power amp - is housed on three separate boards. In effect, says the company, this is akin to having three independent components.

MORE: How to choose the right speakers, part one: research