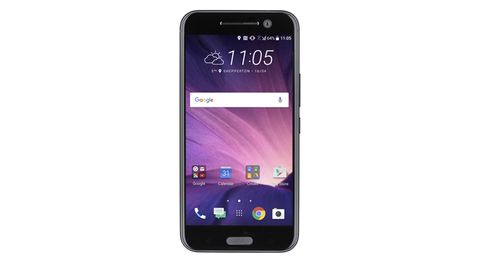 After a few years of five-star success for HTC’s flagship smartphone, last year felt like a bit of mishit for the company. The HTC One M9 was a good handset, but there were better and more exciting ones out there. While HTC seemingly rested on its laurels, others around it were pushing forward, and the M9 was left behind.

Not this year though. In what would be the fourth year of the flagship One brand name, HTC has dropped it – and the M for that matter – for the simple moniker of HTC 10. This symbolic move to separate itself from previous generations is justified – the HTC 10 has been reworked from the ground up, with no part left untouched or unimproved.

This isn't about headline grabbing features though, HTC has focused on nailing the core functionality – and we think it has got the focus absolutely spot on.

If there’s one thing HTC has always excelled in, it’s design. The metallic unibody of the HTC One M7 was one of the best looking handsets we’d ever seen, and its influence not only rubbed off on subsequent HTC phones, but also on the smartphone world around it.

HTC has taken its design in a slightly different direction this time, so instead of the smooth, fluid back panel we’ve seen before, it has opted for a more striking design, with a dual finish of satin-brushed aluminium and diamond cut, mirrored chamfered edges.

It still feels great and sits in your hand just as comfortably as its predecessors, with the more angled edges to its curved back actually giving it a little more grip.

The front panel is now a single piece of glass from top to bottom, incorporating two capacitive buttons at the bottom that sit either side of the phone’s new fingerprint scanner.

HTC says this will register a fingerprint within 0.2 seconds, and should get faster over time. It certainly seemed snappy from our testing – there’s no need to wake the screen either, it will recognise a fingerprint even when switched off.

We can’t say its all-metal back panel and all-glass front is unique, but unlike its midrange A9 handset, HTC has put enough of its own spin on it to prevent too many comparisons. It’s available in a choice of topaz gold, carbon grey or glacier silver.

HTC has given its screen quite a makeover this time round, increasing it from 5in to 5.2in and boosting it from Full HD to a 2K Quad HD display with 564ppi (up from 441 on the M9).

HTC has dubbed it a “cinema-grade display”, thanks to its next generation LCD screen, which promises 30 per cent more colour depth than a traditional LCD and a 92 per cent NTSC colour gamut.

Colours are well judged, with a colour palette that is believable but vibrant too. Reds, greens and blues in particular have great depth and subtlety to them without ever appearing oversaturated.

Blacks go impressively deep for an LCD screen, while managing to hold on to plenty of shadow detail, and whites will go a purer than you’ll see on the iPhone 6S.

Highlights don’t have quite the same power to punch through a dark scene as you’ll see with Apple, but then there’s more detail here, giving a better insight into what’s hidden beneath the brightness.

That’s because there’s real precision to the HTC 10’s picture, with crisp, sharp outlines and stacks of subtle detail on offer. This gives the picture plenty of depth too, helping to make landscape shots more believable.

HTC offers a choice of two colour profiles – vivid and sRGB, both of which can be customised further to your liking. Vivid gives some extra oomph to the colour palette compared to the sRGB’s more natural approach.

We lean toward the latter, but whichever you pick, this is a stunning screen that’s made for watching video on. We’ve loved the iPhone 6S’s picture for some time, but we think this performance tops it.

With the HTC 10 packing its new glass front finish, HTC has had to rethink its front-facing Boomsound speakers. The re-engineered Boomsound Hi-Fi edition works more like a traditional speaker by separating out high and low frequencies.

Low frequencies are dealt with by a speaker on the bottom edge, while higher ones are managed by a speaker in the earpiece.

The result is a louder and clearer performance compared to last year’s M9. There’s more separation and space to the presentation and it’s an overall weightier sound too, with voices well projected. You can choose between ‘music’ and ‘theatre’ profiles for whether you’re listening to movies or music – the latter gives a wider, spacious effect while music is more focused.

Listening through headphones, the performance has been tweaked and improved here too thanks to better audio circuitry. The HTC 10 supports 24-bit/192kHz hi-res music, and has upscaling tech on board for 16-bit files. There’s also a headphone amp that HTC claims delivers twice the power of a conventional one.

It also features a new Personal Audio Profile System, which uses several tone tests to develop a unique audio profile tuned to your individual hearing capabilities. It then adjusts the sound frequencies to each ear to suit.

We found it only made subtle differences to most tracks, sometimes making them louder than with it switched off and perhaps adding a touch more bass response.

Boomsound with Dolby processing returns as a setting too, and creates a bolder, more upfront sound than with it turned off. This worked well for hip-hop and rock tracks, but classical and acoustic tracks suffer from the slight loss of subtlety – luckily it’s easily toggled on or off depending on your preferences.

There’s subtlety here too, with the HTC 10 offering up real clarity and insight through the midrange, so Bjork’s personality-packed Lionsong vocal sounds as quirky as it should be.

While the midrange shines with its detailed performance, the HTC 10 is superbly even-handed across the frequency range, giving plenty of well-controlled kick to the low end while offering up a clear, open treble that never sounds pushed.

We listened to a handful of CD quality tracks too, which don’t feel lacking in comparison to their hi-res counterparts. The clean, precise character carries through, which speaks volumes for the HTC’s upscaling capabilities.

If there has been an Achilles’ heel to HTC phones in the past, it has been their cameras. Its Ultrapixel technology didn’t work as well as it should have, and while each subsequent version has seen minor improvements, they’ve just not been able to keep up with the competition.

Luckily HTC appears to have got its act together with this year's camera. The main snapper is now 12MP (down from 20MP on the M9) with optical image stabilisation and a larger f/1.8 aperture for better low light snaps.

It also packs the company’s second-generation autofocus, which delivers photos in a super quick 0.6s – three times faster than the focus on the M9. Results are pretty good – the auto mode is largely reliable as a point-and-shoot snapper, with well-judged colours, plenty of detail and sharp, well-defined outlines.

Low light performance is a bit hit-and-miss; the Samsung S7 just pips the 10 for the most consistent shots in variable light.

Budding photographers always have the option of the pro mode too, which allows more controls to tweak your photos and the ability to save them in RAW format.

HTC has adopted its 50/50 camera concept on the HTC 10, which means it aims to make the front camera just as good as the rear. The pixel count takes a dip to 5MP, but it packs the same bright f/1.8 aperture with optical image stabilisation – the world’s first selfie camera with OIS technology.

This means selfies look sharp and detailed, plus the 86-degree wide-angle lens ensures you can squeeze everyone in. 4K video recording is on board too, with another first in the form of stereo 24-bit hi-res audio recording.

It claims to capture 256 times more detail than standard recordings across twice the frequency range. It shows too, audio is both cleaner and clearer in our test clips.

HTC’s Sense skin over Android has long been one of our favourites, thanks to its relatively lightweight approach. However, HTC has taken it a step further with the 10 and worked in collaboration with Google to produce an operating system that offers the best of both worlds.

This means a user interface that looks very much like vanilla Android, with HTC adopting Google’s bold, graphical Material design across its own suite of apps.

There’s no more bloatware or repeated apps either, with HTC only providing the best app for the job at hand. This means you’ll get Google’s Photos app but HTC’s camera, which work seamlessly together. It's an approach we'd like to see more manufacturers adopting.

The HTC 10 doesn’t hold back in the spec department, with a Snapdragon 820 processor, 4GB RAM and 32GB or 64GB of on-board storage. There's also a microSD card slot offering a storage boost of up to 2TB.

The power it’s packing shows in use. We were never kept waiting by the HTC 10, whether dipping in and out of apps or burning rubber playing Asphalt 8. It packs USB-C charging as standard and includes a fast charger in the box to help charge its 3000mAh battery considerably quicker – you can get up to 50 per cent charge in 30 minutes, with a quoted talk time of 27 hours.

We found the battery life to be very good indeed, and even heavy users should be able to easily squeeze a day out of this. Hours of listening to music barely dented the 10's battery level, leaving us plenty of juice for a full day of Whatsapp, emailing and social networking.

It might have lost its focus last year, but with the HTC 10, HTC is back to its best.

There are no headline features, no gimmicks – this is a phone that takes the core functionality of a smartphone and really nails it, not to mention offers an excellent audio and video experience.

It might be the underdog in a very competitive marketplace, but its performance more than holds its own.